Return on Capital Employed (ROCE) is a type of financial formula that measures a firm’s profitability and how efficiency its capital is made use. In different words, this ratio measures how the firm can generate profits from the capital that it has employed, which includes both debts as well as equity.

The formula is represented as follows,

This ratio is depended on 2 important things: capital employed and operating profit. EBIT or Net operating profit is often reported on the profit and loss statement as it depicts the firm profits generated from its operations.

Hence, this figure depicts how well the internal as well as external sources of finance are employed by the firm.

Let’s see some simple to advanced examples of the ROCE equation to understand it better.

ABC Limited has reported an operating profit of $40,000 and with total assets of $1,000,000, and its liabilities, which are short term, were reported $150,000. Based on the given information, you are required to calculate ROCE.

Use below given data for the calculation of return on capital employed.

Calculation of ROCE can be done as follows: 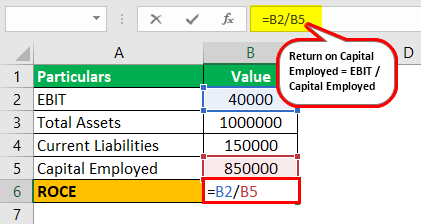 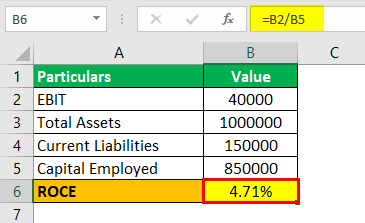 Company X has reported the below figures:

Based on the above information, you are required to calculate ROCE.

The Capital employed can be calculated as per below:

Calculation of return on capital employed (ROCE) can be done as follows: 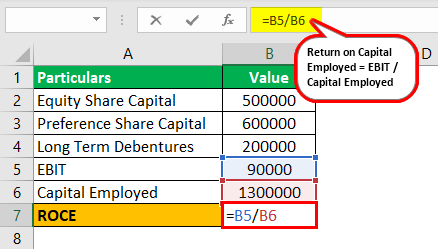 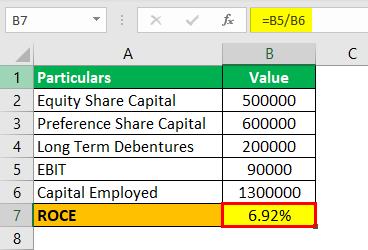 Extracts from Kenzo Limited’s income statement are per below:

Assume capital employed 80,000,000. You are required to calculate ROCE.

Operating Profit can be calculated per below:

Calculation of return on capital employed (ROCE) can be done as follows: 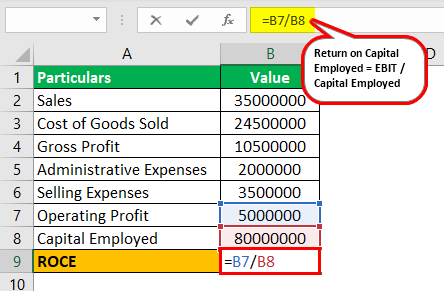 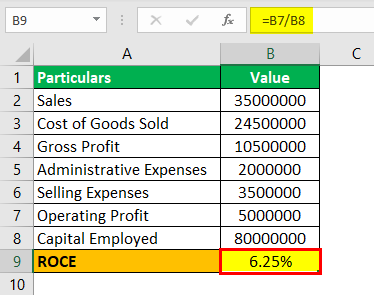 It has been given that the operating profit ratio is the same for both of the firms, which means they are almost at par while generating operating profit from revenue and appear to be that they belong to a similar industry. One ratio that differs is ROCE, and for the firm that has reported higher, ROCE can be concluded to be performing better. Firm A appears to be employing the funds better than firm B, and it also appears that firm A has comparatively less capital employed than firm B.

ROCE is one of the key ratios for measuring the profitability ratio, and it is a good indicator when the ratio shows a positive and increasing trend. This would mean that the firm is successful in employing the capital and is quite efficient in running the company.

PQR has reported quarterly figures along with last quarter comparison; you are required to assess how the company has performed?

Calculation of return on capital employed (ROCE) for the current quarter can be done as follows:

Return on Capital Employed for the current quarter will be –

Calculation of return on capital employed for the previous quarter can be done as follows:

Return on Capital Employed for the previous quarter will be –

How to Use the ROCE Formula?

Investors or the street analyst are always interested in the ratio to check how efficiently a firm is using its capital employed along with its long-term financing goals and strategies. The firms’ returns should always exceed the rate at which the firms are borrowing to fund their projects or the assets in use. If the firms borrow say at 10 % and can only achieve a return of 7 %, this would mean that they are not increasing the wealth of the stockholders but are losing the money.

When one is calculating ROCE, make sure while calculating capital employed, all the sources of finance are considered into account and only excluding the short terms means of finance like current payables, overdrafts, etc. Also, while making a comparison with peer firms, make decisions based on other parameters as well, not just this sole ratio. Banks, Insurance companies, etc. are not a capital intensive business and hence this ratio is of much not use while analyzing those sectors.

You can use this ROCE equation calculator.

This article has been a guide to ROCE Formula. Here we discuss the formula to calculate ROCE (Return on Capital Employed) with practical examples and a downloadable excel template. You can learn more about financing from the following articles –