Shared economy, also known as collaborative economy, is based on the idea of person-to-person lending where the owner of the resources (be it cars, properties, etc.) allows its un-utilized resources rented to the consumer of services, generally via a medium of apps and internet, for a price that is quite competitive in comparison to the organized and traditional businesses in the respective area.

Sharing Economy works on a simple concept of optimal utilization of resources. In earlier times, a need for some service was fulfilled by buying the respective assets, but, in today’s era, when there is a robust network connection due to connectivity of the internet, people tend to pay for services, rather than buying them. The idea has led to a scenario of putting un-utilized resources on rent. So, various platforms like renting cars, houses, books, clothes, pets, etc. are quite common in the time being. 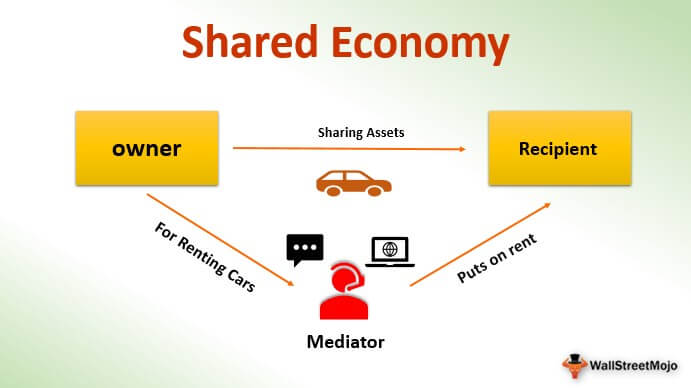 Generally, the sharing economy works on the three main constituents; owner of resources, recipient of services, and the mediator or the agent. Though few transactions do happen with the direct involvement of buyers and sellers of offerings, the participation of the internet with technological support or mobile applications is all over the place. Nowadays, an app-based service offering has eased out the pain of both sellers and buyers in sharing economy. These apps are smart, and with the help of the Internet and Global Positioning System, it does the difficult tasks for both the parties by increasing the efficiency of the system.

How Does Shared Economy Work?

The sharing concept works primarily on the need to share resources and to earn some additional earnings from it. Similarly, on the other side, there is no harm in using the resources at a comparatively lower price. Also, the tendency for buying assets and consuming it seems to look paler in the current scenario when there are a plethora of options available at ease. So, using this concept, multiple companies such as Uber and Airbnb have flourished and shown that existing resources could add extra value to all the parties and the internet has turned out to be a catalyst in booming the related businesses.

Let us understand with some examples.

Airbnb facilitates properties to tourists that are unused for the time being by the owners. In this way, the traveler could find a place to stay at rates quite lower than the hotel prices, and on the other hand, the hose owners could make few extra bucks from renting their houses when not in use.

Another widely favored example is taking cars on hire when the owners are not intended to make use of them. Also, as the private vehicles remain idle for around 95% of the time, as given by the data from the Brookings Institute, leasing the cars for a short period turns out to be a great idea. One of the famous service providers in this arena is Zipcar.

The advent of the shared economy has been influential in the recent past. It is growing stronger and stronger over the years. Nowadays, it has multiple platforms available for online workings. Few of them are as follows:

The on-demand economy works on similar principles but varies in the action. Here there is a mediator that makes the service available when it is required by the consumer and in most cases there is an app that doesn’t require one person to stay in connection with other people, and the entire process happens over an application. Thus it is similar to sharing economy in a way that allows idle resources to be used by consumers but without a hassle of going through checking the security and other issues.

Despite the prevalent issues in the sharing economy, benefits such as employment of unutilized resources, competitive price offerings, and better utilization of resources, etc. easily outnumber the negatives in a big way.

This has been a guide to the shared economy and its definition. Here we discuss features, impact, examples and how does shared economy work along with advantages and disadvantages. You may learn more about financing from the following articles –