Full-Form of MOU – Memorandum of Understanding

How Does the MOU Works?

Contents and Format of MOU

When parties come forward to sign a memorandum of understanding, the talks must have reached a stage where parties know what to expect from the relationship and how to proceed in the goal’s direction. Each party may prepare its own set of terms in line with their talks and come up with a joint version of MOU taking into consideration each party’s interest from their documents.

MOUs, commonly have the following contents when they are drafted: 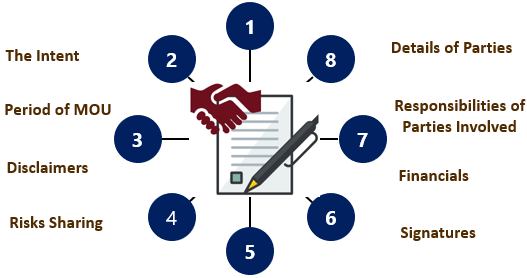 The intent is the description of what the parties intend to achieve from the relationship or partnership. The intent should be straightforward with no ambiguity whatsoever for ease of reference and clarity of purpose.

#2 – Details of the Parties

Each of the parties participating in the memorandum of understanding should have themselves named in this section of the MOU. They could be countries, organizations, institutions, companies, or trade bodies.

It should then define the period the MOU will be valid for. If, for whatever reason, the parties are not able to move in the direction of the MOU, the MOU stands ceased at the set date. Memorandum of understanding is not eternal.

It should have adequate disclaimers laying out any responsibilities, facts, processes that both the parties should distance themselves away from. Any controversial arrangements should be mentioned in this segment for clarity.

Parties should clearly own the risks that will be borne by them during the partnership. The risks could be within or beyond the control of the respective parties. Irrespective of the risk’s nature, the parties should adequately cover all forms of risk in the MOU. Risks that will be jointly shared should also find a mention in this segment.

Each party or the representatives should sign the memorandum of understanding, agreeing to the terms mentioned in the MOU.

The above are the components of a basic MOU. Parties can make it more complex or simple, depending on the nature of the transaction. For example, a memorandum of understanding between two charitable institutions to share space in a building can be extremely simpl. At the same time,e an MOU between the two governments on their trade and commerce can be extremely complex, running into thousands of pages detailing every part of the proposed arrangement.

When to Use Memorandum of Understanding? 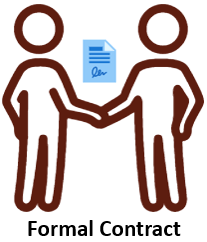 Parties chose to enter into MOU when they need something better than a verbal commitment and less than a formal contract. It is just a formal seriousness pact between parties. A Memorandum of understanding can still be a step in the direction of a formal contract if the parties decide to make the partnership, which has serious implications. It could also be signed between non-profits as they are considered less threatening than the formal contract.

The purpose of a typical MOU is to layout what the parties have agreed to in a formal relationship or partnership. It is better than a verbal commitment, is documented, and can be referred to if any of the party digresses from the path laid out in the document. In the absence of an MOU, it is hard to even mutually settle disputes during the arrangement, putting the achievement of the end goal in jeopardy.

This has been a guide to the Full form of MOU – Memorandum of Understanding and definition. Here we learn how does the MOU work and when to use along with format, purpose, advantages, and disadvantages. You may refer to the following articles to learn more about finance –