What is the Like-Kind Exchange?

Like-kind exchange, also known as the 1031 exchange, is a transaction or a combination of transactions that prevents the current tax liability under the United States Tax Laws on the sale of an asset because another similar asset is acquired in place of the existing asset.

A like-kind exchange is a transaction to defer the capital gain tax arising in the transaction of sale of an asset when it can be shown that the proceeds are being used to acquire another asset in the place of the first-mentioned asset. It is called the 1031 exchange because Section 1031 of the Internal Revenue Code exempts the seller of an asset when the proceeds of the sale are reinvested in assets of value equal or higher. An exchange will not be considered as a like-kind exchange if the asset being bought is the personal property of the seller. In all other cases, this would apply. 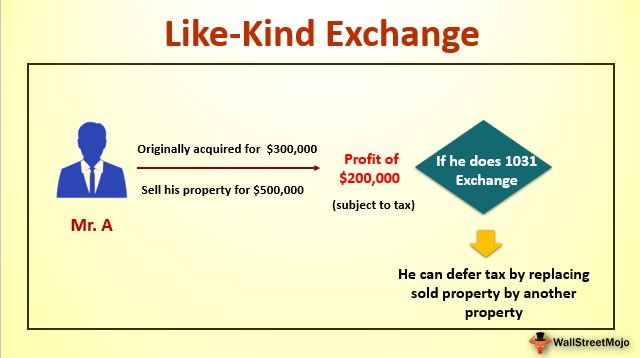 Broadly there are 4 types of a like-kind exchange. Namely, simultaneous exchange, delayed exchange, reverse exchange, and continuous or improvement exchange. 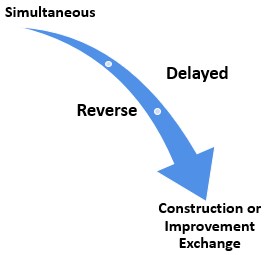 It is the most common and preferred type of exchange. In this type, the owner of the asset sells it and then acquires the replacement property within the time frame (45 days for identifying the property to be acquired and 180 days to complete the sale).

It is also known as a forward exchange wherein the property which has to be acquired as a replacement is acquired in advance, i.e., the property is bought first and exchanged later.

Improvements to the property can be made using the tax-deferred dollars for enhancement of the same while placing the property in the hands of a qualified intermediary within 180 days.

Let us consider an example of Mr. A, who wants to sell his commercial property for $500,000, which was originally acquired for say, $300,000. This transaction would lead to a profit of $200,000, which would be subject to tax. But, if Mr. A does a 1031 exchange, he can defer this tax by replacing the sold property by another property similar in nature and character (with a 45-day and 180-day period as mentioned in rules below).

There are 7 primary rules. They are as follows:

All said, the bottom line is that when one wants to sell an asset to buy another asset in its place, one should look at the rules mentioned in the 1031 exchange. If the rules are in line with the facts of the individual case, there would be tax benefit that could arise. Of course, there are many pros and cons, and a decision has to be taken, keeping in mind all the factors mentioned.

This article has been a guide to what is the Like-Kind Exchange. Here we discuss types, rule, and how does like-kind rule work along with an example, advantages and disadvantages. You can learn more about financing from the following articles –