What is the Law of Marginal Utility?

Marginal utility is the satisfaction derived from increased consumption of a product or service and as a general principle, marginal utility decreases with more and more consumption. This is called the theory or the law of diminishing marginal utility and was first proposed by the German Economist H.H.Gossen in the 19th century.

The following are examples of the law of marginal utility.

Let us first understand this concept with the help of a basic example of everyday life.

Say, you are hungry and had food to satiate your hunger. This meal would be extremely satisfying. But after that, you decide to have some more food. This would not be as good as the first because you are already full. So the ‘utility’ you had when you ate the second meal is less than that of the utility you had while you ate the first meal.

This applies to many and most products like medicines, cosmetics, food, drinks, chocolates, etc.

If we can treat this example with the help of numbers by assigning numbers or units to the utility achieved to the utility obtained by consuming a product, say an ice cream, it will be as follows:

If we plot the above data on marginal utility graph, it would look like this: 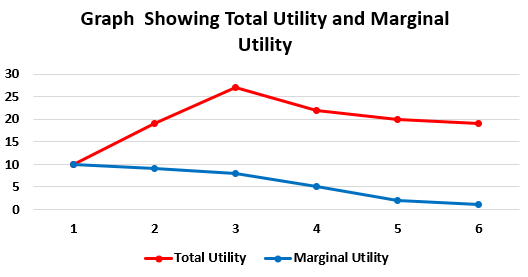 As we can see, there is a fall in the marginal utility which is interpreted to be its very nature.

Assumptions of Law of Marginal Utility

Some of the assumptions are as follows:

But there are exceptions to the law of Diminishing marginal utility which means there are certain products, the utility for which increases as the consumption increases. Let us get to know about such products:

Also, certain conditions when such law does not apply are as follows:

Some of the advantages are a follows:

Some of the disadvantages are a follows:

Marginal Utility means the additional utility that is derived from consuming an additional unit of a product or service. The basic nature of the marginal utility is that it decreases with every additional product consumed as propounded by the economist H.H.Gossen called the Law of Diminishing Marginal Utility, sometimes also referred to as Gossen’s First Law.

But for this declining marginal utility, there were certain assumptions taken as discussed above, some of which were considered to be unrealistic. The law also has ignored certain factors that are necessary to determine the marginal utility of the products which made the then economists question its validity.

That said, the law has a lot of merits like helping the government in tax regimes, helping the producer in understanding the market and the consumers, assisting socialists to prove their contentions, etc.

This has been a guide to what is marginal utility and its definition. Here we discuss examples of the law of marginal utility along with assumptions, advantages, and disadvantages. You can learn more from the following articles –