The following monopoly examples provide various types of monopolistic businesses. The examples are both theoretical and practical i.e. there are companies that are monopolistic in the field they trade-in. Since there are a lot of monopoly examples not all variations and types are explained here but the outline of all types remains the same i.e. the firm or a company is a sole seller of a product with no competitors or substitutes. 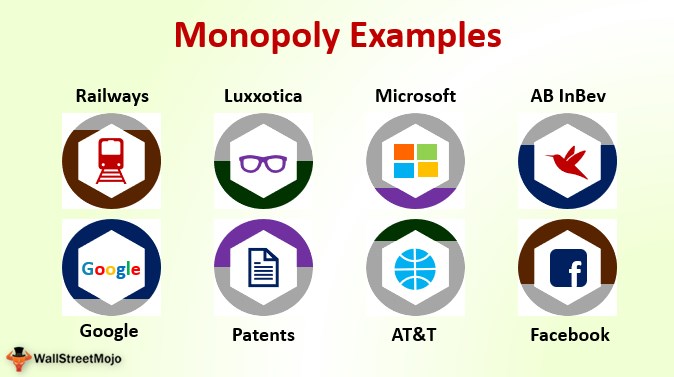 The following are examples of monopoly in real life.

Public services like the railways are provided by the government. Hence, they are a monopolist in the sense that new partners or privately held Companies are not allowed to run railways. However, the price of the tickets is reasonable so that public transport can be used by the majority of people.

Luxottica – A Company that owns all the major brands of sunglasses. The Company has bought almost all the major eyewear brands however, they are still named differently. This creates an illusion in the mind of the customer that they have a variety of sunglasses to choose from although they are all manufactured by one Company. Luxottica produces more than 80% of the eyewear worldwide.

Microsoft – Microsoft is a Computer and software manufacturing Company. It holds more than 75% market share and is the market leader and virtual monopolist in the tech space.

AB InBev – A Company formed by the merger Anheuser-Busch and InBev distributes over 200 types of beer including Budweiser, Corona, Beck’s, etc. While these beer names are different and have a different composition to give a different taste, however, they belong to a single Company. So, when people consume different Beers they are paying a single Company in a sense.

Google has become a household name and whenever we don’t know any answer probably googling is the answer. The biggest web searcher with their secret algorithm controls more than 70% market share. The Company has grown into a web of services interlinked with each other like the maps, Gmail, search engine, etc. The Company has left its competitors – Yahoo and Microsoft behind with its innovation and technological advancement.

Patents provide a legal monopoly to a Company albeit for a short period of time. During the time the patent is in force no other Company can use its invention for its own purposes. A casino in Genting Highlands, Malaysia held an exclusive patent for legalized casino and it enjoyed the legal monopoly for years in Malaysia.

In 1982, AT&T a telecommunications firm was the sole supplier of telephone services across the whole U.S. and it was found to be violating the antitrust laws. Due to its monopolistic activities for service as essentials telecommunication, the Company was forced to split into six subsidiaries called Baby Bells.

Social media is the new market in the current century while the users are offered free services, the Companies earn from the advertising revenue. Facebook with its huge chunk of market share almost has a monopoly in this business. The Company is ahead of all its competitors like Google+, Twitter, etc. and has seen both organic growth in the number of users and social media advertisers and acquisition of other companies like Whatsapp, Oculus Rift, etc. The Company is such big that recently it was charged with affecting the users’ sentiment on the way the elections are fought and inclines them towards a single person or a party.

While monopolies are common in the capitalist economy however, governments keep a check that they do not take advantage of this and charge the customers high rates for their goods and services. Proper laws are made to check the monopolistic prices of the Companies. The governments have made anti-trust laws to protect consumers from the predatory behavior of monopolistic Companies.

This has been a guide to Monopoly Examples. Here we discuss its definition and the top 8 practical examples of Monopoly in real life with detailed explanation. You can learn more about accounting from the following articles –