What is Asset Coverage Ratio?

Asset Coverage Ratio is a risk analysis multiple which tells us if the company’s ability to repay the debt by selling off the assets and provides details of how much of the monetary and tangible assets are there against the debt which helps an investor to predict the future earnings and gauge the risk involved in the investment.

Generally, a minimum ratio is already defined by the authorities for the companies to maintain a specific level of debt so that there is a balance in the company’s leverage position. The higher the ratio, the higher is the investment favorability since the high ratio denotes that the assets of the company outweigh the liabilities, and the company is financially stable with effective capital management.

Let us assume that below is the data for Netflix for the year 2017-2019; now, let us calculate the asset coverage ratio for them. 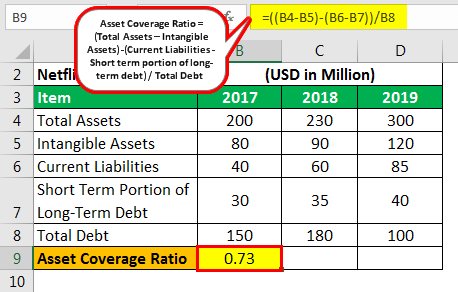 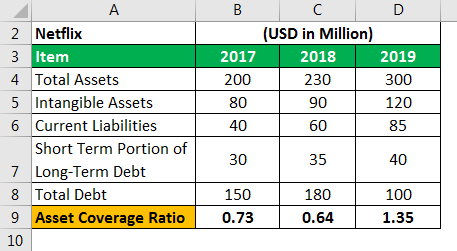 From the above example, we can see that the ratio for Netflix has improved from 2017 to 2019; we will interpret and discuss this ratio in the next section.

Let us compare two telecom giants in the USA, T-Mobile, and Verizon, whose Asset coverage ratio we calculate using the formula.

The higher ratio tells us that the company has enough assets to repay its debt and the lower ratio signifies that the liabilities outweigh the assets and risk factors are involved.

We can see that Netflix’s Asset coverage ratio decreases from 0.73 in 2017 to 0.64 in 2018, but then increases drastically from 2019 to 1.35. So, Netflix initially in 2017 has assets to cover only 0.73 portions of its liability, whereas, in 2018, it went down further, which means the company is either taking more debt or is selling off its assets, which makes the ratio go down. In 2019, the ratio shoots up to 1.35, which says either that the company has repaid a portion of its long-term debt of the company is expanding with effective production management by investing in more Fixed Assets.

Asset Coverage Ratio for T-Mobile and Verizon for the years 2017, 2018, and 2019 are 1.2, 1.3, and 1.35. We can clearly see that there is a lot of movement in T-Mobile from 1.3 to 0.9 and finally to 1.1. Whereas, comparatively, Verizon comes across as a stable company maintaining the ratio year on year. It doesn’t necessarily mean that Verizon is a better investment avenue than T-Mobile, there a numerous other factors which needs to be considered before making the final decision. It might be a possibility that T-Mobile is planning to launch a range of new services in the market, and for that, it is increasing the debt on its balance sheet.

On the other hand, Verizon is playing safe by maintaining the standard ratio without any new launch; a short tern dent might be to gain long term benefits. This ratio just tells us the debt and assets balance of any company at a particular time period; then, it is the analyst’s job to consider other factors before making the final call.

The asset coverage ratio, if used efficiently, can prove to be a great resource for the analysts; certain other factors also need to be considered along with this ratio to make an informed decision. It is helpful for both the investors, equity, or debt, and comparing the ratio with a competitor and industry-standard can give a clear picture of the financial health of any company.

This article has been a guide to Asset Coverage Ratio. Here we discuss the formula for calculation of asset coverage ratio along with examples, advantages, and disadvantages. You can learn more about financing from the following articles –