Demonetization in layman’s term is the eviction of a particular currency/tender present in the economy from circulation and thus replacing the same with a new currency which may aim for several outcomes like the corruption-free economy, black money removal, controlling inflation, stop funding of illegal activity, etc.

The US went for demonetization of all noted above $100 on July 14, 1969, which brought about positive results to the economy. This was primarily aimed at eradicating the black money present in the system and the move was highly acclaimed by all. This decision can sometimes be also linked to the evolution of the US Banking system.

Considering the recent demonetization India faced, the country’s central bank or reserve bank of India stated that though it was announced where tenders of 500 and 1000 were declared as banned and were asked to get it exchanged by new tenders, it was not that beneficial as almost all the old tenders were deposited or either exchanged with the new tenders. The estimated figure stands as 99% or around $238.7 billion.

It meant that corrupt individuals and businessmen who held the illicit wealth managed to safeguard it. The only positive impact which came out of the decision was the investigation of close to 1.8 million bank accounts where there was a sudden huge volume of transactions and also numerous individuals who were taken for questioning to identify and tax the black money. 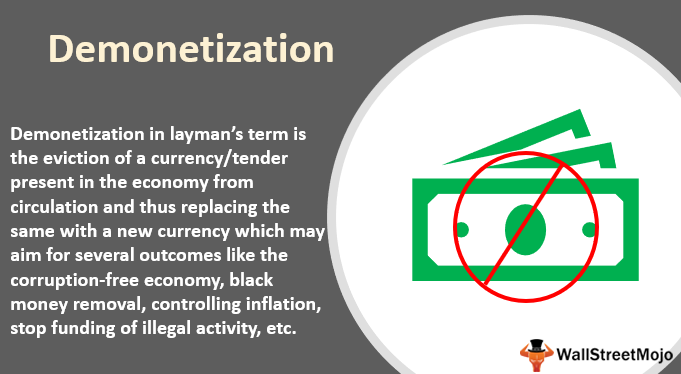 Demonetization is definitely a very radical and positive step that a government takes aim at the betterment of the economy/country but this should also be implemented properly and planned well to avoid hassles to the common public and serious harm to the economy.

This has been a guide to what is demonetization and its meaning. Here we discuss the practical examples of demonetization along with its effects and disadvantages. You can learn more about financing from the following articles –