What is the Net Promoter Score (NPS)?

Net Promoter Score (NPS) refers to the metric developed by management consultant Fred Reichheld in the year 2003 with the objective to measure customer loyalty. It can be anything between a low of -100 (all customers are detractors) to a high of 100 (all customers are promoters), which indicates the willingness of customers to recommend a particular product or service to others. 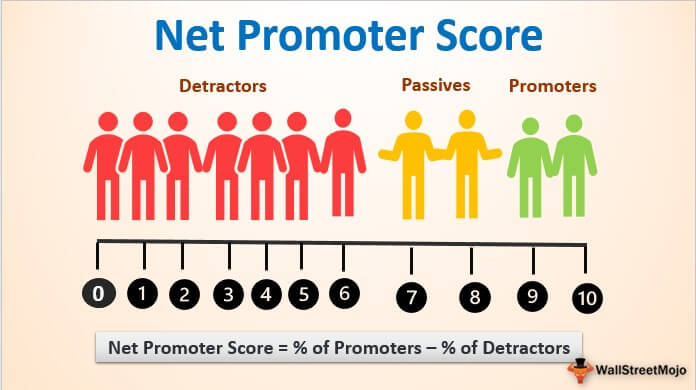 How Does Net Promoter Score Work?

On the basis of the ratings that the customers provide, they are then classified into three broad categories:

How to Calculate Net Promoter Score?

Although the net promoter score is very popular among business executives, it also has its share of critics from academic and market research circles. Some of the criticisms are as follows:

What Is Good Net Promoter Score?

The net promoter score is a very important metric as it is used by most of the large companies as a tool to measure customer feedback. As an output it gives an easy-to-understand figure that can be used by managers to achieve customer delight (and not just satisfaction). In fact, some of the marketers believe that net promoter can be used as a proxy indicator of a company’s growth potential.

Some of the major advantages are as follows:

Some of the major disadvantages are as follows:

So, it can be seen that although the net promoter score is considered a very useful management tool, on its own it may not be sufficient to draw strong insights. However, if used in conjunction with the right framework, it can provide valuable inputs for a company. Its USP is its simplicity that has resulted in a large number of companies using this tool on a regular basis.

This has been a guide to the net promoter score and its definition. Here we discuss how to calculate and how does net promoter works along with advantages and disadvantages. You may learn more about financing from the following articles –