What is a Black Swan Event?

Black Swam event is metaphor used for the events, transaction or specific activity that happens which cannot be predicted nor even expected to happen. Such events are highly rare, it has a huge impact on the economy, society, politics, etc and its coverage remains widespread and therefore, needs to be handle with great caution. The term was coined by Nassim Nicholas Taleb, who has also written a well-known book on this topic. 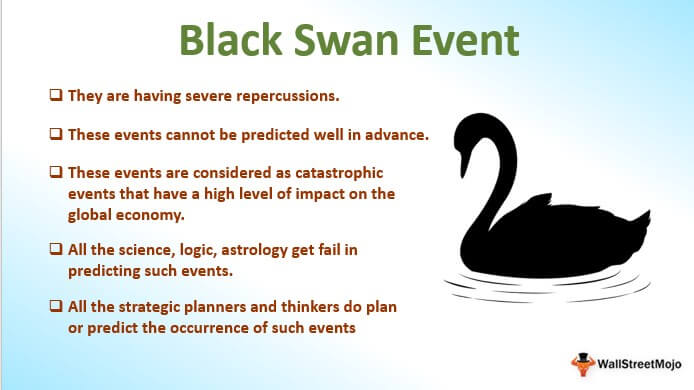 The following are some examples:

In the USA, the year 2008 is remembered by all citizens as this year is considered a dark chapter in their history, and the stock market crash took place. The whole Wall Street was in a blood bath, and in these events, one of the largest investment banks of the USA: Lehman Bros, filed for chapter 11 bankruptcy.

No one can even imagine that one of the most prestigious financial institutes of the nation with such a golden history in the US economy will have to go for this step. It resulted in a catastrophic situation in the US stock exchange; the effect of this catastrophe was huge, and it affected almost all the stock exchange of the world. The vast amount of dollars wiped out of the market.

Inflation is one of the significant indicators of the economic health of any nation. One will expect the price of bread can be doubled or tripled during high inflation situation. However, in 2008, in Zimbabwe, hyperinflation reached such a high level that the price of bread increased by seventy-nine billion times of normal price. It’s not possible to predict such a kind of havoc.

Attributes of a Black Swan Event

Why Is It Called a Black Swan Event?

Black swan events are highly unpredictable, full of surprises, bring new things along with it. One cannot master it, and one cannot firmly say that such an event can be a black swan event or not. It will always be dependent on the observer’s perception of how much he can recognize and how much it proves to be surprised to them. However, the only odd thing is that it is a probability that it may or may not occur.

This article has been a guide to what is a black swan event. Here we discuss features, examples, attributes, and why it is called a black swan event along with benefits. You may learn more about financing from the following articles –