What is Predatory Pricing?

Predatory pricing can be defined as a pricing strategy where the prices of goods and the services are fixed at such low level that it becomes almost impossible for the other firms to compete in the existing market and are thus forced to go out of the race.

This is a pricing strategy wherewith the deliberate efforts; an organization uses its advantages in order to sabotage the market along with damaging its competitor’s position. According to this strategy, prices of the goods or services are kept at the lower range where other firms find it difficult to match the price and survive in the market. So, this act drives away existing and potential rival contenders and created a sort of the situation of the monopoly in the market. 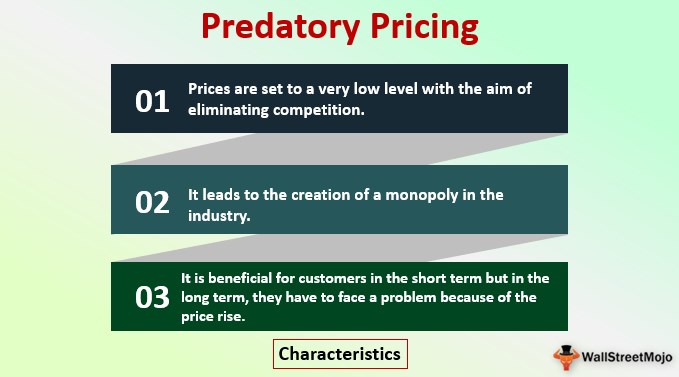 There are several retail stores in the town selling various products to the person living in the local community. Suddenly one departmental store was opened by the renowned ABC departmental chain store setting the price of all the products at a level which is lower than that of the retail stores. Customers started going to the ABC department store as they were getting the same products at a lower price and thus the entire retail store started losing their customers. Initially, retail stores lowered their prices due to significant price pressure and for matching with the price of the competitor to regain their customers but eventually, they all closed their stores as they were not able to survive in the current situation. With this closure of the retail stores, the situation of the monopoly created in the market and then taking advantage of the created situation, ABC increased the prices of the product.

From the perspective of the customer, it is beneficial in the long term as well but it is the customers only who have to face the after-effects of this. This is so because once the organization adopting this pricing strategy is successful in its plan of eliminating the competition from the market; it would eventually raise the prices of products to a great extent according to its choice and then the customers have to buy at that price only because of non-availability of the alternative products.

Predatory Pricing is the strategy where the organization reduces the price of the products in order to eliminate the competition from the industry. This leads to the creation of the situation of monopoly in the market. This is beneficial to the customers in the short run and long term as well but it is the customers only who have to face the after-effects of the same.

This has been a guide to What is Predatory Pricing & its Definition. Here we discuss the characteristics of predatory pricing and how does it work along with examples, impact, advantages, and disadvantages. You can learn more about from the following articles –