Channel stuffing is a deceptive and illegal practice by means of which a company or a business forces more products, than could be sold, into its distribution channel such that it inflates the sales for that product. Such tactics, although considered malpractice, are used to achieve short-term sales objectives that can be detrimental to the business in the longer run.

It leads to inflation of sales numbers (volume and revenue) in the first few months when products are overloaded in the distribution channel while the following months receive sales decline due to the stagnant flow of products from distributors to end-customers (retailers in some cases). 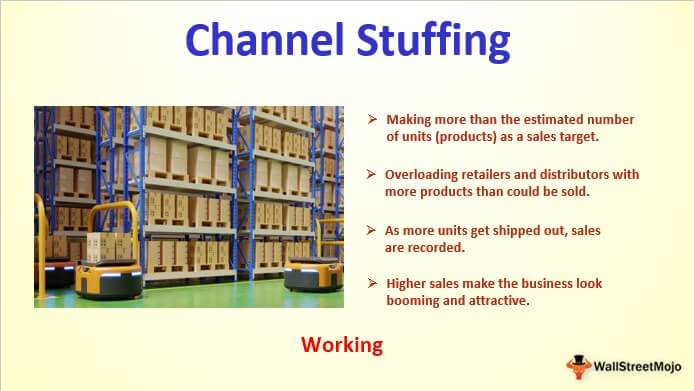 Channel stuffing illegally helps in speeding up of sales to customers through the distribution network.

One of the popular cases came into light some years ago when Monster Beverage Corp was accused by its shareholders of having released inflated results. On an outlining note, the claim accused the company of selling too many drinks to Anheuser-Busch, later categorized as channel stuffing. The outcome was inflated overall results and climbing share price. The executives of Monster Beverages were accused of taking advantage of the deliberately inflated share price. After proper audits were carried out and accurate results released, the share price fell 25 percent.

How to Avoid Channel Stuffing?

Companies should take the following actions to avoid this –

According to the US GAAP standards, revenue recognition should be done only when it has been earned. While when businesses use channel stuffing to inflate sales, there is a mismatch as revenue is not recognized because of discord in the distribution channel regarding oversupply.

GAAP realizes that deceptive practices can project business sales and lead to the disillusioning of stakeholders. Hence, GAAP states that no revenue is recognized unless realized and earned.

Channel stuffing is also known as trade loading and is counted among the deceptive practices in business. It is important for businesses to know that revenue recognition criteria provided by US GAAP should be correctly interpreted. The realization of performance obligation associated with the contract is an important aspect which can significantly check deceptive practices.

It not only causes irreparable damage to business reputation but also hits the company with various costs related to inventory holding, production upsets, forecast and estimates of sales, transportation, etc.

This has been a guide to what is Channel Stuffing and its definition. Here we discuss examples, how does work, and how to avoid channel stuffing along with effects. You may learn more about financing from the following articles –