The commodity is a basic good that is used in the manufacturing of other products and services, or as a store of value, manufactured or grown by different producers across the globe with little or no differentiation.

The following are types of commodities. 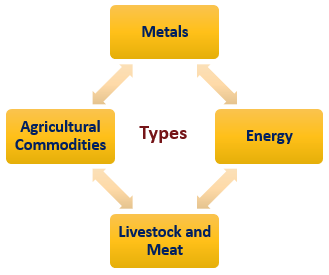 Metals are generally manufactured by processing mined ore. Steel, copper, aluminum, gold, and silver are some of the most common metallic commodities. Metals can further be classified into two categories:

It mainly provides fuels to run motors, appliances and even space rockets. It plays an integral part in the overall functioning of the world. Commodities like oil, electricity, natural gas, gasoline, and ethanol are a few common examples.

These are produced by farmers and traded worldwide. The most common examples are rice, wheat, corn, and sugar.

Role of Commodities in Business and Economy

It plays an integral part in the overall functioning of the economy. Giant companies are involved in commodity trading across the world. Different countries specialize in producing different commodities based on the availability of natural resources in those countries. China is the world’s largest manufacturer of steel, while Chile leads in copper and Russia in aluminum. China is the world’s largest consumer of most used hard commodities due to the manufacturing boom it has seen in the past 2-3 decades.

Price discovery happens based on demand and supply. Supply disruptions like the closure of manufacturers or natural disasters or cartel cuts generally result in higher prices. Alternatively, an unanticipated spike in demand due to increased economic activity or for any other reason results in increased commodity prices. Similarly, price declines come on the back of higher supply or lower demand.

Several investors and traders including giants like Dangote and Cargill are major traders in commodity markets. The margins are quite low in commodities due to its fast-moving nature, efficient price discovery, and low entry barriers.

Another breed of traders is called speculators who just buy or sell contracts in anticipation of the higher or lower prices in the future. Its price speculation is widely practiced and speculators hardly take or deliver physical commodities.

Regulations in the Commodity Market

There are no regulations when two parties join hands privately to trade commodities, however, if the trades happen through exchanges, those trades are governed by regulatory agencies like the Commodity Futures Trading Commission (CFTC) in the United States and Markets in Financial Instruments Directive (MiFID) in Europe.

The regulatory agencies try to limit the speculative activity to avoid unnecessary formation of bubbles led by the vested interests of the few players.

Commodities go through cycles every once in a while when their prices increase significantly (generally in an economic bull run), reach unsustainable levels, and then decline subsequently to remain in a slump for some time. It is possible for all commodities (especially metals) to display this behavior at the same time, but there could also instances of individual commodities seeing a cycle at different times.

Commodities have been around for centuries and the world has evolved significantly. The market has also evolved, and with the trade and commerce commodities travel easily from one part of the world for use in other parts of the world. Agencies across the world are trying to figure out how we can use less of some polluting commodities and replace them with not so polluting material for environmental sustainability.

There is no doubt that commodities have played an important part in shaping humanity and economies and they will continue to do so in the future.

This has been a guide to what is a commodity and its definition. Here we discuss the cycle and pricing of commodities along with its types and regulations. We also discuss the advantages and disadvantages. You can learn more about investment banking from the following articles –