Estimated Tax is the approximately calculated tax to be paid by an earning individual eligible to pay taxes over their income. This amount is projected annually based on the net income earned by the individual after all deductions as per the income tax act prevalent in a particular State for that fiscal year.

In simple words, it refers to a self-paid tax, which is determined by the assessee from the income they have received or expected to receive by them during the financial year. Consequently, they deposit such tax on estimation without invoking the provisions of withholding of taxes.

Income may include salary receipts, capital tax gains, interest income, dividends, and coupon receipts, self-occupation, or any other form which adds to the net amount available with the individual/ company. Individuals (or companies) with unequal monthly income may annualize their income to calculate the total income received during the year.

It must be rightly intended by the tax-payer to disclose all incomes and deductions and calculate this amount accurately, to avoid last minute penalties or other severe consequences. In the case of excess tax payments, the amount can be recovered after the end of such fiscal year at the time of return filing.

John works for ABC Corp and earns $100,000 annually. He has been paying $1,000 as withheld taxes each month to his company. He has a child whose expenses are $5000. He has invested in T-bills securities, which are projected to earn him an income of $2,000 during the year. Calculate the estimated tax to be paid for the current year by John. 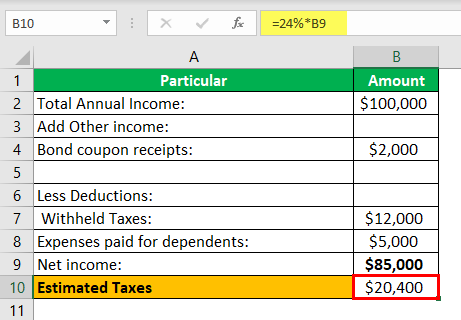 In the above example, consider the below-added information for John and re-estimate the taxes to be paid by him: 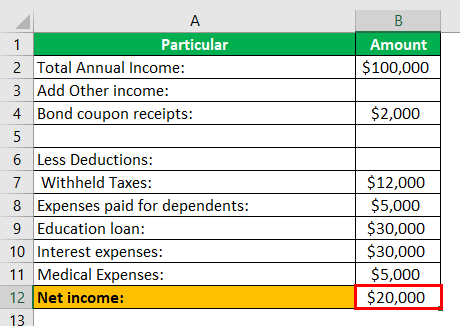 It is supposed to be paid by all individuals once they are in the eligible criteria. Payment of such taxes should be made accurately and in a timely manner since otherwise, it may attract a penalty. Based on the deductions allowed under the IRS codes, the amount needs to be calculated. After the end of the particular fiscal year, reconciliation needs to be done by filing returns. The net tax amount calculated may be positive or negative, which then needs to be paid by the individual in case of positive and vice-versa.

This article has been a guide to what is Estimated Tax and its Definition. Here we provide the formula and steps to calculate the Estimated tax along with practical examples, Advantages, and Disadvantages. You can learn more about Accounting from the following articles –