Seasonal unemployment refers to the time period when the demand for labor or workforce is lower than normal under certain conditions, however, such a situation is only temporary and employment reverts to normal thereafter.

The following are examples of seasonal unemployment.

Let us understand this concept of seasonal unemployment with the help of an example:

There are a few seasonal crops i.e. crops that yield only in a particular season e.g. the Rabi or the winter crops. Farmers working for the yield of these crops would be seasonally unemployed during the other time of the year. That means, when there is an off-season for one crop, the farmers are unemployed as they do not get to work on the field for any other purpose.

To further understand, let us consider another example of seasonal unemployment:

Christmas Jobs: There are a few extra jobs that are created during the Christmas and new year eves e.g. the salesmen in a few retail stores, for the sales of Christmas trees, decoration, Santa disguises, etc. after which they will not have any work for the rest of the year. They are employed only to deal with the additional customer activity during the relevant season and would not be hired for an entire year but only for the particular season. 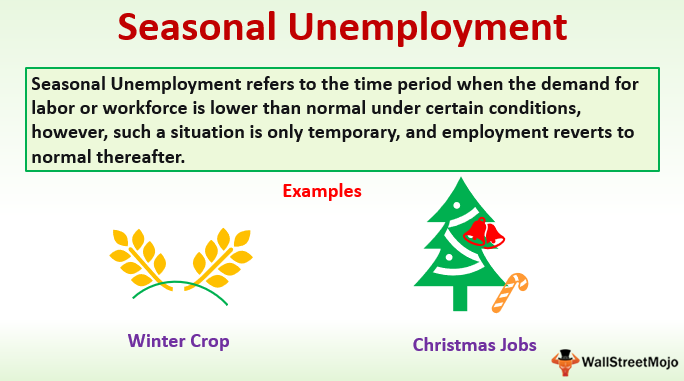 The following are the benefits of seasonal unemployment.

The following are limitations of seasonal unemployment.

Seasonal unemployment is sometimes confused with disguised unemployment. Let us understand the differences between the two to appreciate the concepts individually:

Seasonal unemployment is an agreed condition by the employers and the workforce that they will be hired only for a part of the year and after the agreed-upon time, the workforce will remain unemployed for the rest of the year. This occurs when a few industries slow down or shut down for a particular season or make shifts in their production schedule as per the weather, demand, etc. Another reason may be short term projects such as construction, etc. As noted above, it is different from disguised unemployment where more number of people are employed in a job than actually required.

We have seen that this time of unemployment has its disadvantages like any other type of unemployment meaning, idle workforce not able to make any money for survival during the unemployed part of the year. That said, there are also advantages as discussed earlier that it being better than unemployment wholly, pursuing interests, etc.