Deflation is a decrease in the prices of goods and services when there is negative inflation (below 0%) and usually results in increased purchase power of the consumer.

Deflation can be caused due to the following two reasons;

#1 – If the productivity of goods and availability of services is increased in a given economic environment, the prices generally tend to decrease. This follows a simple supply-demand rule where excess supply causes lower prices. Economic history is replete with examples of such kind of deflation where oversupply in agricultural commodities caused prices to fall until the demand was matched.

#2 – If the overall demand for goods decreases, there is a subsequent reduction in prices. This effect takes place in order to bring back the supply-demand equilibrium. 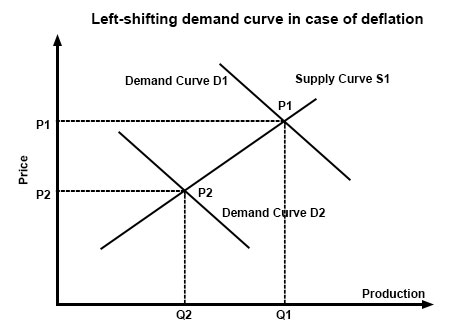 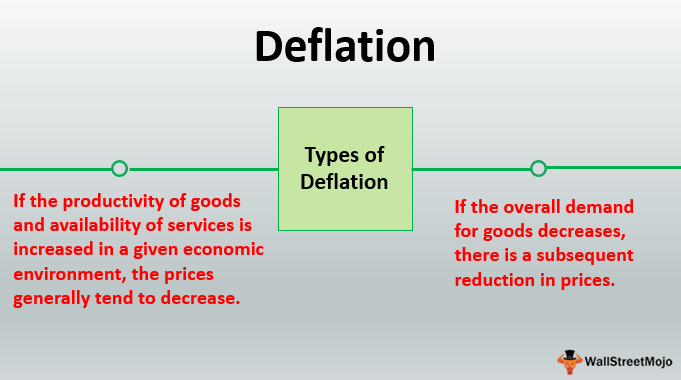 Let’s see some examples of deflation to understand it better.

The industrial revolution is considered as a period of good deflation. In the late nineteenth century, productivity improved greatly due to highly efficient steam engines, the shift of workforce from agricultural to industrial production, and huge steel-producing industries. These factors brought down the costs and caused good deflation. On one hand, the industrial revolution minimized costs and improved margins, on the other hand, it consistently increased labor wages.

Hong Kong is a good example of deflation in recent times. In 1997, after the Asian financial crisis ended, the Hong Kong economy suffered from deflation. It was coupled with cheaper imports from China. This situation was not to end until 2004 having affected many Asian economies.

They can be good if the underlying reasons are increased economic activity and technological advances. In the modern era, continuous technological upgrades have brought about efficiencies and synergies in processes. This has led to competitive cost-cutting in products and services. This kind of deflation is termed as good deflation because it does not alter supply-demand equilibrium and still manages to lower the prices.

If the deflation is caused by an oversupply it can cause a mismatch in production and demand thus, disturbing supply-demand of the economy. This causes a stagnation in the production of goods and services and a reduction in the circulation of currency.

They can cause a consumer to lower his spending and cause the real value of debt to increase.

It is a situation that is very difficult to deal with. The sentiments of the consumers take a strong side by the tendency of lower spending. It is for the government and its institutions to take expansionary measures with its fiscal and monetary policies.

On a parallel plank, it should convince its people to spend more by predicting inflation to increase. The government should take measures to increase the overall demand in the economy and cut down on interest rates to rise retail and capital spending.

While deflation can also be good for an economy, but it should not persist for a longer duration. However, deflation that is consistent with technological advances and higher production is a good sign of economic growth. They can hit the economy on two fronts:

It is when the inflation rate falls below zero i.e. the prices of commodities do not increase. Although it may seem to be beneficial for an individual consumer at first, deflation affects the economy as a whole. It stiffens up the purchasing sentiments and hinders the growth of businesses in the markets. If not dealt with strongly, deflation may end up turning into a deflationary spiral resulting in the economic slowdown.

This has been a guide to what is deflation and its meaning. Here we discuss the causes of deflation along with examples, limitations, advantages, and disadvantages. You can learn more about economics from the following articles –