What is Transaction Risk?

Transaction risk is referred to as a change in the cash flow of a foreign transaction settlement due to an unfavorable change in the exchange rate. It generally increases with the increase in the contract period.

Below are some examples of Transactional Risk.

For example; A British company is repatriating profits to the U.K. from its business in France. It will have to get Euro earned in France converted to British Pounds. The company agrees to enter into a spot transaction to achieve this. Generally, there is a time lag between the actual exchange transaction and settlement of the transaction, as such if the British pound appreciates as compared to Euro this company will receive lesser pounds than what was agreed to. 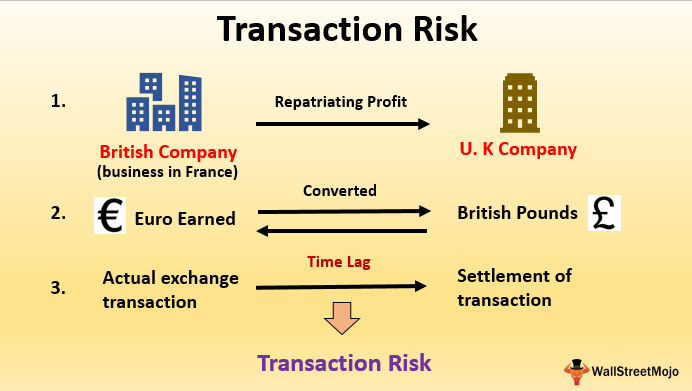 Let’s build a numerical example to solidify the concept of transaction risk.

How to Manage Transactional Risk?

A lot of it can be understood from the practices of major banks especially investment banks, who are heavily involved in multiple currency dealings on a daily basis. These banks have formal programs in place to combat transactional risk.

These risks are usually synced with credit risk and market risk which are centralized, in order to institute and administer command over the entire structure of risk operations. There may not be a general consensus in terms of who in the organization assumes the job of determining transactional risk, however, most commonly a country risk committee or credit department does the task.

Banks normally assign a country rating that encompasses all types of risk including currency lending, locally as well as abroad. Important to note is that these ratings especially ‘transactional risk rating’ go a long way in determining a cap and exposure limits every market deserves, keeping in mind the companies policies.

How to Mitigate Transaction Risk?

Banks susceptible to transactional risk indulge in a variety of hedging strategies through various money market and capital market instruments, which largely include currency swaps, currency futures, and options, etc. Each hedging strategy has its own merits and demerits and firm’s make choice, from a plethora of available instruments to cover their forex risk that best suits their purpose.

Let’s try to understand a firm’s risk mitigation attempt by buying a forward contract. A firm may enter into a currency forward deal where it locks the rate for the period of the contract and gets it settled at the same rate. By doing this firm is almost certain of the quantum of the cash flow. This helps encounter the risk faced by rate fluctuations and brings in greater stability in decision making.

A company can also enter into a futures contract promising to buy/sell a particular currency as per the agreement, in fact, futures are more credible and are highly regulated by the exchange which eliminates the possibility of default. Options hedging is also a very good way of covering rate risks, as it demands only a nominal upfront margin and curtails the downside risk to a great extent.

In fact, the best part about the options contract and the main reason they are largely preferred is that they have unlimited upside potential. Additional they are a mere right, not an obligation, unlike all the others.

A few operational ways through which banks attempt to mitigate Transaction risk;

Every company that is expecting a cash flow in a transaction which is subject to uncertain fluctuation faces a transaction risk. Many banks have in place a secured mechanism to address transactional risk. However one of the best lessons learned from the Asian Crisis is the consequences of failure to keep a good balance between credit and liquidity.

As such it is extremely important for companies exposed to forex to be able to draw a reasonable tolerance level and demarcate what is extreme exposure for the company. Spell out the policies and procedures and implement them precariously.

This has been a guide to Transaction Risk and its definition. Here we discuss how to manage and mitigate transaction risks along with examples and explanations. You can learn more about financing from the following articles –