What is Breach of Covenant?

Breach of Covenant happens when the parties involved in a contract fail to comply with the promises made in the agreement. The defaulting party that has breached the covenant is liable to get sued for the occurred damages.

In simple words, a covenant is a written promise that cannot be violated. Covenants are a part of many financial contracts. For example, banks may include a clause in a lending contract that prescribes the borrower to keep a certain ratio of debt and equity. In case of a violation, the bank will impose a penalty on the borrower.

Example of Breach of Covenant

Let us understand the concept with a simple example.

Hence, it is important to note that this clause acts as a saviour when people disobey a contract’s terms. So, it is always included in a contract to protect both the parties’ rights and interests from any severe damage arising from a breach.

What are the types of Breach of Covenant? 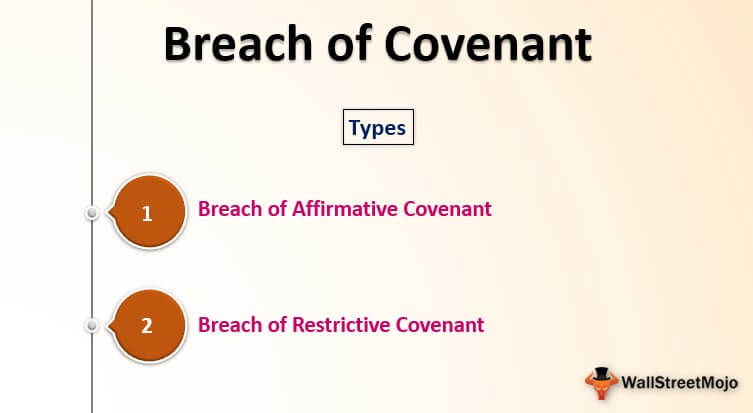 We will now take you through these types to help you understand the concept in detail.

This type of breach is also called a positive covenant. Here, the agreement demands a party to do certain things as a part of keeping the deal. For example, while extending a loan, the affirmative covenant will list certain conditions that the borrower will need to fulfil.
The lender can put together any conditions like regularly showing audited reports, abiding the rules or timely payment of the instalments. Violating any of these clauses will qualify as a breach. As a punishment, the lender may demand immediate repayment of the loan.

Consequences of Breach of Covenant

The Route of a Waiver

In case you are wondering if the defaulters have any remedy for breach of covenant, then the answer to that is a waiver. When the breach and damages occurred are non-severe in nature, the affected parties can take a waiver route. In case of an unconditional waiver, the defaulters aren’t imposed with monetary compensation or any other provisions.

The conditions could be demanding the payment of the penalty, or the compensation for the collateral that was a part of the contract.

This article has been a guide to What is Breach of Covenant and its Meaning. Here we discuss the two types of covenant breach (Affirmative & Restrictive) along with examples, importance, and consequences. You can learn more about from the following articles –