What is Double Taxation?

Double taxation refers to the income tax which is imposed twice on the same earned income, asset or finance transaction by the same or multiple jurisdictions; It usually occurs when the same income is taxed both at corporate as well as at the individual level.

In simple words, when we pay income tax twice on the same source of earned income, asset, or financial transaction, then this taxation principle is known as Double Taxation. This taxation principle may be applied at both corporate and personal levels. Again when there is international trade, then this Taxation is applied in two different countries.

For example, corporate profits when earned are taxed as corporate tax and then taxed again as personal income when it is distributed as dividend among the stockholders. Also, in the case of an owner of an organization, who is also the employee of that organization, gets taxed when he receives the salary. Again if he receives the dividend from the company being a shareholder, he needs to pay tax on his tax. 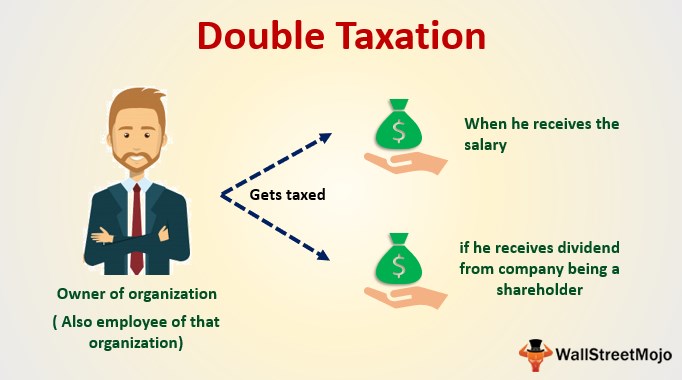 Tax Results when the dividend is given:

How to Avoid Double Taxation?

International businesses often face issues of taxation principles. Their income gets taxed in the country where it is earned, and then this income is again taxed when it is sent back to the business’ home country. In many cases, the total tax rate becomes so high, making pursuing international business an impossible and expensive venture. To avoid these kinds of situations, countries all over the world have made hundreds of double taxation treaties just to avoid Taxation, which is based on models given by the Organization for Economic Cooperation and Development (OECD). Mentioned in the double taxation treaty by signatory nations are the limits of their Taxation of international business to help in trade between two countries and to avoid Taxation twice.

This Taxation has always been a topic of debate, as a lot of corporations find it unfair to pay taxes twice on the same income. One of the ways to avoid this is to stop paying dividends and retain the additional profits as retained earnings. Growth companies do not pay dividends as they do not have ample surplus funds after spending on expansion. Mature companies generally pay the dividend as they don’t have a lot of requirements of funds for expansion. But these days, more and more mature organizations are going to share buybacks instead of paying dividends. In this way, they are, on the one hand, rewarding the shareholders and, on the other hand, are sparred from getting double taxed.

This article has been a guide to what is Double Taxation and its meaning? Here we discuss how Double Taxation works in Corporations along with practical examples and how to avoid it. You may learn more about accounting from the following articles –