What are Fallen Angels?

Fallen angels are a type of bonds that are vested with an investment-grade rating and the same has been impacted as a result of the issuer’s financial condition and ultimately reduced to junk bond status and it can be municipal, corporate or even sovereign debt.

A bond that is now a Fallen Angels will often experience further declines as investors may pull out in anticipation of further downgrades. The compounded fall in the value can have grave repercussions, eventually leading to possible rate cuts and a further level of declines. Additionally, it can have a downward spiral on the industry and cascading effects on the overall economy as well.

For instance, Moody’s assigned Company ‘Y’ an investment grade rating of ‘A’ indicating the firm is a high-quality firm with very low counterparty/default risk. Due to a major shift in the economic situation and mounting debt responsibilities, Company ‘Y’ experienced a massive decrease in their sales numbers for 3 consecutive quarters. This resulted in Moody’s downgrading Company Y’s credit rating to CCC, i.e., junk bond status for speculative firms that could fail in its debt commitments. Thus, the bond of Company ‘Y’ will be considered as a ‘Fallen Angel.’

Some of the features of a Fallen Angels are:

In terms of statistics, Fallen angels compose around 4% of the market. As of 2016, some companies like Fossil Group and Symantec were on the brink of Junk Bond status.

The following strategies are applicable to the recovery of Fallen Angels: 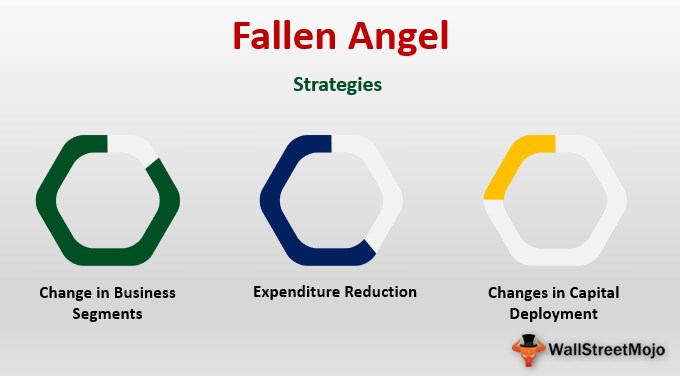 A firm/entity may face a downgrade in the credit rating due to the below performance of specific segments of a business. A classic example is that of Nokia, whereby the telecom equipment business generated higher revenues than the handheld devices segment. This was due to the shift in consumer preferences and technological advancements. Nokia was unable to generate adequate revenues from the business of handheld devices due to sophisticated competitors such as Apple and Microsoft entering the market.

The shares of Nokia turned out to be a Fallen Angels, and they found it relatively hard to get back on track. The ideal option for such an entity is to sell or close the struggling division and divert the resources towards high-profit potential. A similar situation was applicable to Nokia, whereby they had the opportunity to focus on improving the telecom equipment segment.

This is one of the less popular manners to get back on track but is a tactic adopted across the globe which includes:

A firm/unit struggling with a situation of Fallen Angels can make changes to the process of Capital deployment by reducing the amount of capital allocated to underperforming segments and subsequently enhancing the allocations to the well-performing segments.

For e.g., AIG (American International Group) implemented such a strategy to remain stagnant post the financial crisis of 2008. This involved:

Risk and Opportunities of Fallen Angels

If a core level analysis is conducted, fallen angels do offer its share of pros and cons. Some of the associated risks with fallen angels are:

Despite various fallen angel risks, some of the opportunities offered are:

Fallen Angels refer to a bond that was once attached with a High/Stable rating, but due to some unfavorable circumstances, it has experienced a serious and sustained decline in the ratings and market demand.

Very often, these fallen angel bonds have outperformed the original high-yield issues. For instance, in 2015, in the European region, these bonds exceeded the high yield issue by around 3%. The returns from Fallen Angels were around 6%, whereas the regular high-yield bonds offered around 3%.

While fallen angels have historically outperformed, the same should not be assumed. In 2010-11, they had underperformed due to subordinated bank debt and peripheral Eurozone bonds. While an influx of fallen-angel supply has the potential to boost long-term returns, fundamental research, including deep sector expertise, will always be critical in identifying the best of these firms to avoid unnecessary risk and make the most of the opportunity.

This has been a guide to Fallen Angels, its characteristics, and recovery strategies. You may also have a look at these articles to learn more about Fixed Income.