Fiscal policy is a policy adopted by the government of a country required in order to control the finances and revenue of that country which includes various taxes on goods, services and person i.e., revenue collection, which eventually affects spending levels and hence for this fiscal policy is termed as sister policy of monetary policy.

Though the actual purpose of the fiscal policies are argued among the ministers of the country, in essence, the objective of fiscal policy is to take care of the local needs of the country so that the national interest can be kept as an overall goal.

As we note from the above snapshot, China reassures that its fiscal policy is still expansionary despite the fiscal deficit cut. What do we mean by this? Let us first understand the types of fiscal policies. 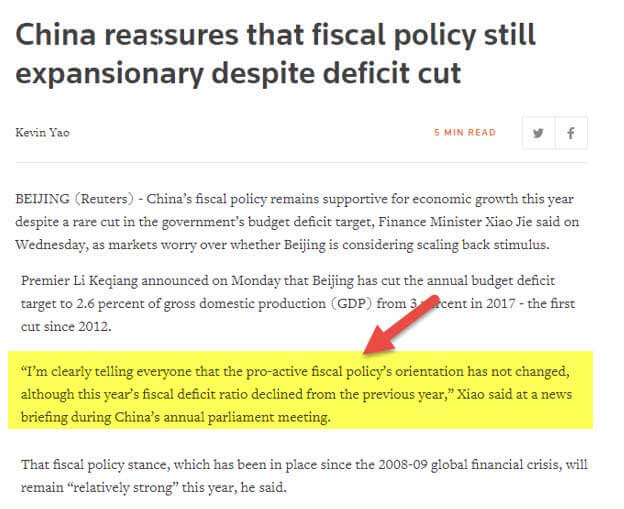 There are two types of fiscal policies. Both of these policies work well for the overall growth of the economy. But the government uses one of them at times when one is required more than the other. 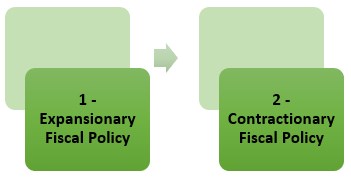 Let’s talk about both of these.

This policy is quite popular among the people of the country because through this, consumers get more money in their hands and as a result, their purchasing power increases drastically. The government uses this in two ways. Either they spend more money on public works, provide benefits to the unemployed, spend more on projects that are halted in between or they cut taxes so that the individuals or businesses don’t need to pay much to the government. You may think which one is more prudent! People who favor government spending prefer it over cutting taxes because they believe that if the government spends more, the unfinished projects would be completed. On the other hand, individuals who prefer cutting taxes talk about it because they believe that by cutting taxes the government would be able to generate more cash into consumers’ hands. Expansionary policy isn’t easy to apply for state government because the state government is always on the pressure to keep a budget that is balanced. As it becomes impossible at local levels, expansionary fiscal policy should be mandated by the central government.

Fiscal surplus and fiscal deficit are two important concepts of this policy. The idea behind these two concepts is simple.

First, let’s talk about fiscal surplus, and then we will define fiscal deficit.

When the government spends more money than it earns, then it is called a fiscal deficit. This concept is very much known to the public because the media and newspapers talk a lot about it. When a government creates a fiscal deficit, it needs to take the debt from external sources and then bear the cost (if any). Fiscal deficit, as you can expect, is a much more common phenomenon than a fiscal surplus.

The main tools of the fiscal policy of any government are two. Let’s have a look at them –

To ensure economic growth, the government needs to spend money on projects that matter. The projects can be creating a subsidiary, paying the unemployed, pursuing projects that are halted in between, etc.