Differences Between Forwards and Futures

Futures Contracts are very similar to forwards by definition except that they are standardized contracts traded at an established exchange, unlike Forwards, which are OTC contracts.

These are over the counter (OTC) contracts to buy/sell the underlying at a future date at a fixed price, both of which are determined at the time of contract initiation. OTC contracts, in simple words, do not trade at an established exchange. They are direct agreements between the parties to the contract. A clichéd yet Forward Contract goes thus:

A farmer produces wheat for which his consumer is the baker. The farmer would want to sell his produce (wheat) at the highest price possible to make some good money. The baker, on the other hand, would want to buy the same wheat from that farmer at the lowest price possible to save some good money assuming there is only one farmer for the baker or other farmers are in some way, a disadvantage for the baker. The price of wheat is the same for both the farmer and baker and keeps fluctuating – obviously!

Cometh the concept of a Forward Contract to help both the farmer and baker. The contract gave a benefit where they could transact at a certain fixed price at a future date then be affected by the vagaries of price movements in wheat. Let’s assume that wheat was at $10/bushel in the spot market.

Since the farmer and baker want to protect themselves from disadvantageous price fluctuations, they enter into a forward contract where the baker agrees to buy say 30 bushels of wheat @ $10/bushel after one month from that farmer. Now regardless of how the price of wheat moves, both the farmer and baker are happy to have a fixed price to sell and buy in the future. They can get a nice sleep since the farmer isn’t going to get worried if the price of wheat falls, nor the baker would get worried if the price goes up – they have hedged their risk by entering into a forward contract.

Kindly note that the farmer vs. baker example is only indicative!

I’ve already mentioned how forwards are used, but the purposes for which they are used are different. One is for hedging as the example suggested

The above assumes physical delivery. Generally, a trader enters into a contract to settle for cash where the profit/loss will be settled in cash between the parties to the contract.

Forget the technicality for now, but if the participants to the forward contract feel that the forward is mispriced, then they take advantage of this by either buying or selling the contract and the underlying such that the balance is maintained and no more easy and riskless profits can be made. After all, if there is a free body with flesh in the ocean and its blood is sensed, why wouldn’t sharks go and attack it – the end result being that no more such free bodies exist after that!

The type of forwarding Contract depends on the underlying. Thus the contract can either be on a company’s stock, bond, interest rate, a commodity like gold or metals, or any underlying you can think of!

Futures Contracts are very similar to forwards by definition except that they are standardized contracts traded at an established exchange, unlike Forwards, which are OTC contracts. Please do not give this as a definition of a Futures Contract in an interview or exam – I would like you to frame it on your own because it would help! Though they are very similar to Forwards, the definition alone is not the only difference.

Key Differences Between Forwards and Futures

The structural factors in a Futures Contract are quite different from that of a Forward.

A margin account is kept in a place where Futures Contracts require the counterparties to put up some amount of money with the Exchange as ‘margin.’ Margins come in two types:

This is an amount to be put up with the Exchange as you enter into the contract. This is similar to what we know as a ‘caution deposit.’ Depending on the daily profit or loss arising in a position, the gain/loss is either added to or deducted from the initial margin on the day of entering the contract and from the remaining amount held in the margin account from the end of the day till contract expiration.

This is the minimum amount of money that has to remain in the margin account below, which that particular counterparty again has to put up margin to the level of the initial margin. In this case, a Margin Call is said to have been triggered.

Margins were introduced to keep the contract marked to market (MTM).

Here is a simple example to understand this:

The above example should be more than enough to clarify your doubts regarding Futures Contracts. Nevertheless, here are some points to note:

The example above is a very simplistic one but gives you an idea of how a margin account is maintained with the Exchange.

You should’ve asked this question – what if one counterparty dies or defaults? If a counterparty says the buyer of the Futures dies and thus doesn’t respond at expiration, then the margin account balance gives a portion of the recovery to the seller. Then the Exchange pays up to buy the underlying from the seller in the spot market (since the spot price and futures price converge at expiration). 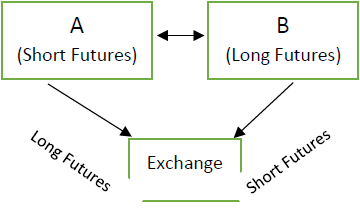 If B decides to terminate the contract before expiration, then the Exchange is the counterparty as it prevents A from being orphaned. It matches C to take the opposite position of B and thus keeps A’s position the same. 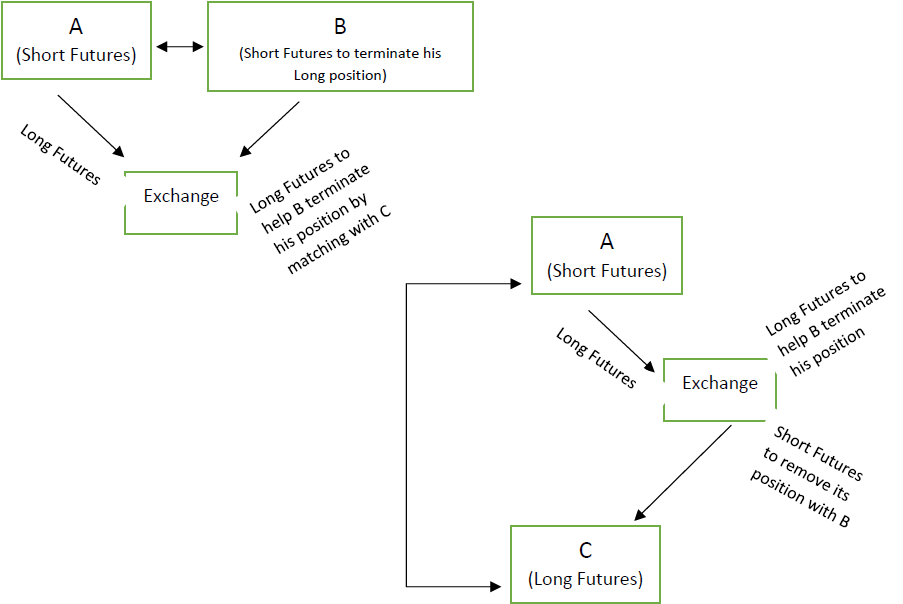 Notice that A’s position with the Exchange remains unchanged throughout. This is how trading futures benefit us since the Exchange takes opposite positions to help us out. How lucky are we!

Other Differences – Futures vs. Forward

The Futures market created liquidity by standardizing the contracts through the underlying in three ways:

You may want to trade only 50 potatoes for delivery else short term trading in the futures market. But the Exchange may allow you to only trade in lots of 10 where each lot consists of 10 potatoes. Thus the minimum number of potatoes you can trade is 100 potatoes and not 50, which is your requirement. This is another way standardization occurs.

There is a lot of information given – no doubt, almost everything you need to know about forwards vs. futures is present except for numerical problems. Due to its liquidity, Futures are more commonly traded than Forwards in general, although it depends on the underlying.

This has been a guide to highlighting the key differences Forwards vs. Futures. Here we discussed the differences with respect to Margin, Quantity, Quality, and Maturity of Forwards and Futures. You may learn more about derivatives from the following articles –