What is Global Recession?

Due to the tight connection between major economies of the world, economic problems spread quickly across the world. If those economic problems are big enough to bring down the gross domestic product (GDP) of major countries, that results in a global recession.

As per the International Monetary Fund, a global recession is a decline in annual per-capita real world GDP in terms of purchasing power parity. The decline should be perked up by the weakening of one or multiple major economic indicators including Industrial production, trade, capital flows, oil consumption, unemployment rate, per-capita investment, and per-capita consumption. In the U.S., the economy is considered to be in a recession when the economic activity, measured by GPD, falls for two consecutive quarters. 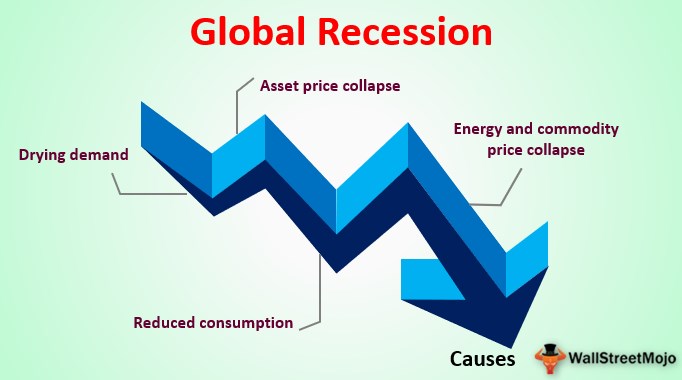 Global recessions can be caused by multiple factors including, but not limited to, wars, asset price collapse, energy and commodity price collapse, drying demand, reduced consumption, reduced wages and a general decline in consumer and investor confidence. The situation gets aggravated by extreme risk averseness that catches up when the recession unfolds.

A global recession impacts countries across the world and hurts governments and private enterprises alike and its major effects of are described below.

Recessions are not generally good as they result in widespread destruction. However, there are also some advantages that should be highlighted –

Global recession does a lot of harm in the short run and it takes a significant amount of heavy lifting for the economies and businesses to get back in shape. The following are some of the most prominent disadvantages –

As per the IMF, a global recession happens every 8 to 10 years. Depending on the excesses or other factors that lead to recession, the severity of these recessions varies. Governments and monetary authorities, with some success, try to balance and regulate critical aspects of the business and economy to prevent recessions from happening.

The impact of the global recession varies from economy to economy. Economies that are heavily dependent on foreign trade for their fortunes witness a higher impact while the ones that are self-sufficient witness a lesser impact. Irrespective of the nature of the economic activity, policymakers have to jump into the damage control mode when this recession happens to safeguard their economies from the outbreak.

This has been a guide to what is the global recession and its meaning. Here we discuss an example of a global recession along with causes and effects. You can learn more about financing from the following articles –