Horizontal Integration is the type of merger that takes place between two companies operating in the same industry. These companies are usually competitors and merge to gain higher market power and economies of scale. Other motives of include a larger customer base, higher pricing power because of increased market share, and lower employment cost as the top management of the merged entity is lower than the two merging entities combined.

Here we are going to look at some of the recent real-life examples of horizontal integrations to get an idea about what motivations lead to this process and how have companies benefitted from it: 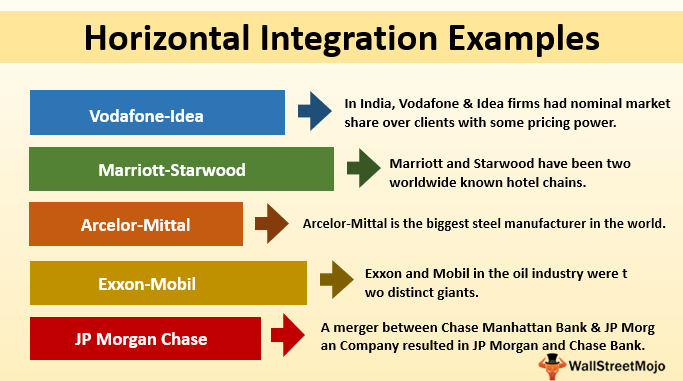 Vodafone and Idea were two telecommunication giants in India. Both the companies had a nominal market share with some pricing power over the customers. However, with the entry of Reliance Jio, all the telecom companies took a significant hit. Jio launched offers that were too attractive for the customers to avoid and gradually started to shift from other companies to Jio. Let us look at a few numbers:

With the combined resources, the merged entity was able to service a larger customer base with relatively lower assets. The cost savings from equipment, employees, operations, and other heads led to an estimated annual synergy of $2 Billion for the merged entity.

Marriott and Starwood were two renowned hotel chains all across the globe. In 2016, Marriot acquired Starwood in a deal wherein the Starwood shareholders were given 0.8 shares of the merged entity against every Starwood share they held (0.8x acquisition ratio).

Post-merger, Marriott has access to over 6000 properties in about 125 countries. The biggest challenge that this deal faced was the merging of the Loyalty programs of the 2 chains because of the different benefits provided by each program. The merger was officially completed, including the consolidation of the different Loyalty programs into 1, by during the second half of 2018.

Arcelor-Mittal is the world’s largest steel producer that was formed after two steel giant Arcelor SA and Mittal Steel Company decided to merge. LN Mittal became the president of the new entity and owns the majority stake.

Mittal started the bid for a merger by offering cash to Arcelor Shareholders. The board initially did not agree to the merger and started looking at Severstal for a possible merger. However, after detailed talks, Mittal improved its bid and, looking at the perceived synergies that the new entity would offer, paid 40.37 Euros to Arcelor shareholders to buy them out. Post-merger, the resulting firm was producing 10% of the world’s total steel.

Exxon and Mobil were two separate giants in the oil industry. They were both a part of Seven Sisters, a name given to a group of 7 oil and petroleum industry companies that dominated the industry from the 1940s-1970s. In 1998, both these companies announced that they were merging to form a new entity, which would be called Exxon-Mobil. It was an all-stock transaction and is, to date, the biggest transaction recorded in the oil industry.

The merger went through an exhaustive review by the FTC to check for the formation of a Monopoly in the petroleum industry. The merger was approved after the company agreed to the terms and conditions set by the FTC upon review.

The JP Morgan and Chase bank was a result of a merger between Chase Manhattan Bank and JP Morgan Company for an all-stock transaction of approximately $31 Billion. Chase Manhattan was the third biggest banking company in the US, controlling an asset worth roughly $396 Billion as compared to the $266 Billion of JP Morgan Company. Together, the merged entity would have total assets worth more than $650 Billion, putting them at the second position after only Citigroup, which had $800 Billion in assets.

The deal was an all-stock transaction, with Chase formally acquiring JP Morgan, exchanging 3.7 shares for each of JP Morgan’s shares.

Horizontal Integrations are a common practice in Corporate Finance. All companies are trying to become the market leaders, and sometimes when the interests of 2 companies align, a merger helps them achieve those interests. The government keeps a check on the mergers and has the power to impose Antitrust Laws, disallowing the merger if it perceives that the merger would lead to situations that are against the public interest. Horizontal mergers are most common among companies in a mature stage of their cycle, who are looking to increase market share and efficiency.

This article has been a guide to Horizontal Integration and its definition. Here we provide you with the top 5 real-life examples of Horizontal Integrations to get an idea of what motivations lead to this process and how companies have benefited. You can learn more about finance from the following articles –