Merger is an agreement or a voluntary fusion whereby two existing entities that are equal in terms of size, scale of operations, customers, etc decides to amalgamate to form into a new entity with an agenda to expand its reach into newer markets, lower operational costs, increase revenues, earn greater control over market share, etc.

In simple words, it means an agreement in which two companies settle into an agreement to form a new third company or legal entity. In this, merged companies are usually of equal size and have a similar number of customers. On the other hand, in acquisition acquirer company is more significant as compared to an acquired company. A new legal entity is being created, while this is not the case in an acquisition. 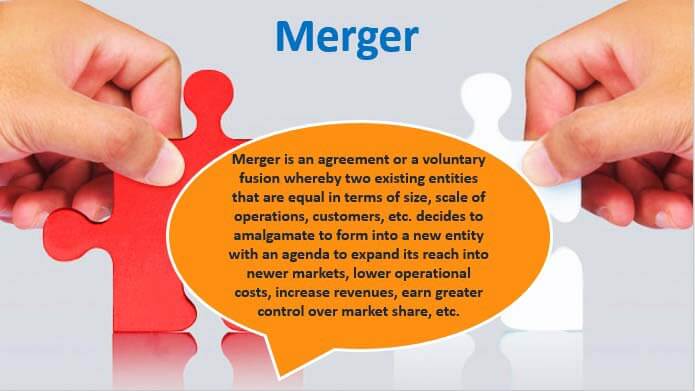 A conglomerate is a type of merger, in which companies are not engaged in related business. It will involve companies which are having no business in common. Usually, these are done, keeping in mind shareholding values.

Here, the companies are in a similar market but having overlapping technologies. In this, one company can add its product line to another company line. With this, companies can get a larger number of customers, and they can benefit from the knowledge transfer of technologies.

Here, the companies sell similar products but are in different geography or areas. With a market extension, companies try to gain access to a larger market group.

In this Horizontal Merger, the companies are in the same product line and a similar industry. It is processed can be a part of the consolidation process. It is a common type of merger between the companies, and the objective is to gain a larger market share, cost-cutting, and have economies of scale.

When 2 companies are at a different level in a product line and are trying to merge them, it is known as a vertical merger. For example, a tire manufacturing company is merging with an auto manufacturing company. It is mainly done to reduce inventory costs and have cost synergies in a merger.

The Disney-Pixar deal was announced on May 5, 2006. Disney made a separate subsidiary and acquired shares worth $7.4 billion of Pixar in an all-stock transaction. It is an example of a vertical merger.

Disney group is one of the largest media group in the world, while Pixar is an animation company which provides computer graphics for the movie. With this, Disney got the best technology of the best animation studios globally for its movies, while Pixar got the required capital to outdo its competitions. For this, Disney offered 2.3 shares of its stock to Pixar shareholders. That means by that price, Pixar shareholders receive a premium of 3.8%.

Exxon Mobil deal was announced in 1998, and it was the largest till that time. The size of the agreement was $73.7 billion. Exxon was the largest energy company, while Mobil was the second-largest oil company in the whole US at that time.

With this, Exxon Mobil became the largest oil company and the third-largest company in the world. From this deal, Exxon shareholders owned 70% of the merged company, and Mobil shareholders were left with 30% shares of the new entity. Mobile shareholders received 1.32 Exxon shares for each Mobil shares. Mobil was valued $76 bn in this deal.

A merger could be a vital part of any business strategies such as an increase in market share or reducing the costs. With the evolving market, it is crucial for a business to keep innovating either by the organic or inorganic way. For inorganic growth, if a business carefully merges a business that can complement its strategy and execute it perfectly, then this marriage could ripe sweet fruit for them.

This article has been a Guide to what is a Merger and its definition. Here we discuss Top 5 types of mergers along with examples, advantages, and disadvantages. You can learn more about M&A from the following articles –