Vertical merger refers to the merger that occurs between two or more business units that operate at different stages of production along with same industry where one is the manufacturer of the product and the other is the supplier of the raw material or services which is required for producing such product.

A classic example of a vertical merger would be between eBay and PayPal in 2002. eBay is an online shopping and auction website, and PayPal provides services to transfer money and allow users to make online payments. Though both eBay and PayPal were operating in dissimilar businesses, the merger helped eBay to increase the number of transactions and proved a strategic decision overall. 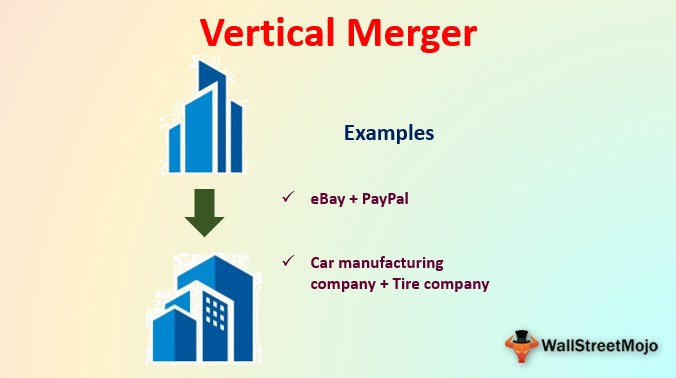 A vertical merger is a combination of two or more companies that are into the same industry but produce different products or services along the value chain. It provides a strategic tool for companies to grow their businesses and acquire more control over the steps supporting the supply chain.

There are many players involved in a supply chain, mainly including suppliers who provide the raw materials, manufacturers produce the product, distributors then provide it to the retailers who finally sell the product and services to the end customers. So why do companies get into such mergers?

Vertical mergers allow companies to use the synergies that ultimately help in operating efficiently, costs getting reduced, and business expansion. It also allows companies to grow their operations into different phases of the supply chain. The opposite of a vertical merger would be a horizontal merger, which involves a merger between two or more companies creating competing products or providing competing services and operate in the same stage of the supply chain.

A very good example of a vertical merger would be a car manufacturing company merging with a tire company. It would not only benefit in reducing the cost for the automaker but also help in expanding the business by supplying the tires to other car manufacturers. So this type of merger will not only make the profit margins better by reducing the costs but also boost the top line, i.e., the revenue through business expansion.

Company A is a manufacturer of inorganic chemicals viz caustic soda lye (CSL) with the byproducts of Hydrogen (H2) and Chlorine (Cl2). The product CSL can be further processed into CSL Flakes and sold in the market with higher realizations. Hydrogen and Chlorine can be further processed into Hydro-Chloric Acid (HCL). The major raw material for the manufacturing of CSL is Industrial Grade Salt, which is called sodium chloride (NACL).

The following are the key financial parameters of A:

100% of Salt procured from third party manufacturers which are manufactured in a season of March to October.

EBIDTA margin on Cl2 and H2 is negative 10% due to a lack of market demand. A does not have an efficient sales team.

With the above profile of A, let’s see various vertical mergers the company can look into with companies in the same industry of inorganic chemicals:

Company B is a manufacturer of HCL with a turnover of Rs. 40 Cr per annum. B procures H2 and Cl2 from the market at the cost equivalent to 50% of sales of HCL. Further processing cost incurred is 40% of sales, and thereby B makes an EBIDTA margin of 10%.

Here A and B can merge with which B will get raw material viz H2 and Cl2 from A at production cost, which is lower when purchased from the market, thereby margin increase to 15% and A will be able to further process H2 and Cl2 into profitable product HCL and thereby improving overall profitability.

EBIDTA margins will thus shape as below:

Let us say Company C is in the manufacturing of Caustic Soda Lye. The company has a very good sales and marketing team. However, C could not increase production due to a lack of funds and process expertise to implement a project for production expansion. C could expand production at an existing site by 30000 MT per annum with an investment of Rs. 100 (‘000,000) and gestation period of 1 year.

For A, to set up a manufacturing unit of this size, the investment required would be Rs. 200 (‘000,000), and the gestation period of the commencement of operations would be 3 years.

Here it makes a good opportunity for A and C to get into a vertical merger and gain economies of scale of size and savings in investment through a brownfield project instead of a greenfield project.

ROCE and IRR for greenfield project by A:

ROCE and IRR for brownfield project with C:

Thus merger synergy benefit could be seen in significantly improved IRR for a project when implemented along with C instead of A doing it alone.

The major raw material – Industrial grade salt is procured by A in the market, and the production of CSL by A is entirely dependent on the availability of salt in the market. A has to buy salt at any price; it can procure and has no bargaining power due to its dependability.

Thus while during peak season, the salt is available in abundance and prices are low whereas, during offseason of salt production, the prices paid by A are very high. Also, in the case of no salt available in the market, then A has to stop its CSL production. This leads to a loss of predictability and stability of the day-to-day profitability and cash flow.

A can here enter into a vertical merger with companies having salt fields producing salt and thereby get assured sourcing of its raw materials. Further, the salt-producing companies can also get an assured supply chain for its salt produced and a steady cash flow leading to a win-win situation.

Example #4– Merger Leading to Improvement in Sales Mix and Realizations

Company D is manufacturing CSL and CSL Flakes. However, due to the lower production of CSL, the CSL Flakes capacity is lying idle for D.

This situation provides the idle opportunity for a vertical merger of A and D, leading to better sales mix in terms of further processing CSL into CSL Flakes and thereby increasing the sales realizations and profits.

This type of merger creates value for the merged business that is worth more than the separate businesses under individual ownership. The rationale behind a vertical merger is to increase the synergy and operating efficiency as a single business entity.

Some reasons for such a merger could be as follows:

Vertical mergers, like other business transactions, comes with a controversial aspect as well. To start with, Anti-trust violation laws often come into play when such a merger is more likely to reduce the competition in the market. It can also be used by companies to block access to raw materials for other players in the supply chain and hence destroying the fair competition through unfair business practices. It also could be used by companies to collude to gain an economic advantage in the supply chain.

Competition is healthy for consumers as it allows the companies to brainstorm and provide innovative, high-quality products and services to the end user. Though using vertical integration to gain the edge over the competitors is not illegal but using it to control the market by shady business practices like controlling the flow of raw material etc. may come under the purview of law and is subjected to scrutiny in many countries. After looking at a variety of benefits the vertical merger has to offer and weighing it against the challenges or consequences it may pose, it still looks a pretty strategic way to expand and operate efficiently.

It uses purely depends on the intention of the merging companies as it could be used to kill the competition and control the players at different stages of the supply chain. Though Anti-trust laws are there in place to put a check to collusion and unfair trade practices like reducing the competition to a bare minimum in order to control the market, still companies do it using vertical merger.

This article has been a guide to what is Vertical Merger and its definition. Here we discuss how Vertical Merger works along with examples and why they happen. You may learn about from these following articles-