What is the Labor Theory of Value?

Labor Theory of Value is a Marxism theory which states that the relative price or economic value of a good or service is determined by the amount of labor required to produce it where it means majorly socially necessary labor.

This was designed by early economists to determine the pattern of exchange of goods and serviced based on the relative price of it. Thus, it was decided that the economic value of a good or service is associated with the relative man-hours put behind it. This is a key pillar to Marxism economics. So it means if producing a shirt requires twice more time than producing a pair of trousers than shirts were considered to be more valuable than trousers and like the chances of future price rise for shirts were double that of the trouser. 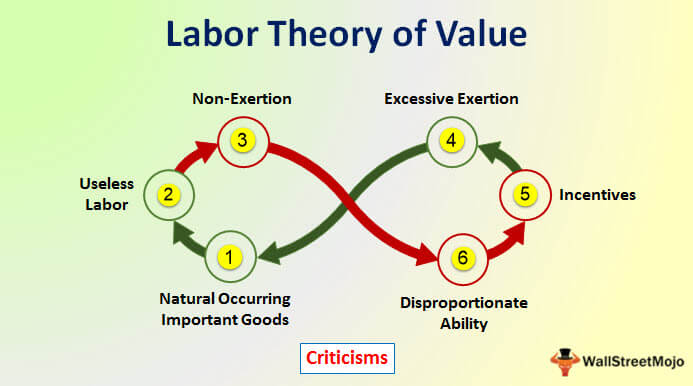 Criticisms of Labor Theory of Value

At times there can be loopholes associated with this theory as lengthy man-hours associated with the product can simply increase its prices even though the time was spent on an inefficient basis. It means drilling a hole and filling it again needs a lot of effort but the net produce is zero.

At times without any important effort, one can charge more or earn more profits than required.  Suppose I provide a very basic idea to another friend of mine who is a businessman and simply charge him on his sales made on the basis of the idea which was provided. Although I have applied no labor as such because the idea was provided by me, the businessman has to shell money for applying the same idea.

At times labor theory can downgrade the labor too. An example can be I have worked for years to develop an idea and patent it. Thus, a lot of effort and time goes behind it but when the idea is launched in the market I only get paid a relative price that is available in the market at that point in time. It may happen that even the idea may be replaced by then by newer versions of the technology. So even though I have spent so much time and effort on the idea I may not be right compensated with.

Here there was no scope of incentives as the production by the worker was equal to the disutility brought about by the worker.

There was no demand for the skill set but the focus was more placed over the quantity of produce. An example to support this can be two workers X & Y producing chairs. While X produces one chair in one hour, Y produces two chairs in one hour and thus Y will be paid twice than X even if there are some defects with the product.

Labor theory was dominant in the 18th and 19th centuries but later was taken over by the subjectivist revolution. It was important because it was more related to the hardship faced by the labor and how it drew attention towards them. It was mainly implemented to save laborers from getting cheated by the capitalists. Marx implemented this theory to understand more about capitalism rather than about economic value

Labor theory though implemented with a mind-set of protecting workers from the hands of capitalist faced a lot of backlashes too. It ignored the role of demand which played a key role in the pricing of any product or services. Also, it was not able to determine the value of non-reproducible goods. Thus, this theory was finally taken over by subjectivity theory but it was prevalent for a long period of time during the 18th-19th century.

This has been a guide to What is the Labor Theory of Value & its Definition. Here we discuss the criticisms of the labor theory of value and example and its differences from subjective theory of value. You can learn more about from the following articles –