What is the Heckscher Ohlin Model?

The Heckscher-Ohlin model also known as The H-O model or 2X2X2 model is a theory in international trade that suggests that nations export those goods which are in abundance and which they can produce efficiently. This was developed by a Swedish economist Eli Heckscher and his student Bertil Ohlin and hence the name. Later, economist Paul Samuelson contributed a few additions and hence this model is referred to as a Heckscher-Ohlin-Samuelson model by a few.

Countries export products that they are abundant of or products for which they have the material/labor in abundance and such countries have a competitive advantage for such goods including land, labor, and capital and this is the basis for this model. Not just abundance, the cost of production or procurement has to be cheaper in such countries.

The reason is simple, – there are two countries. Two countries engage in trading of two goods. There are two homogeneous production factors required for the same.

Assumptions of the Heckscher Ohlin Model

Components of the Heckscher Ohlin Model

The four major components of the theory are as follows: 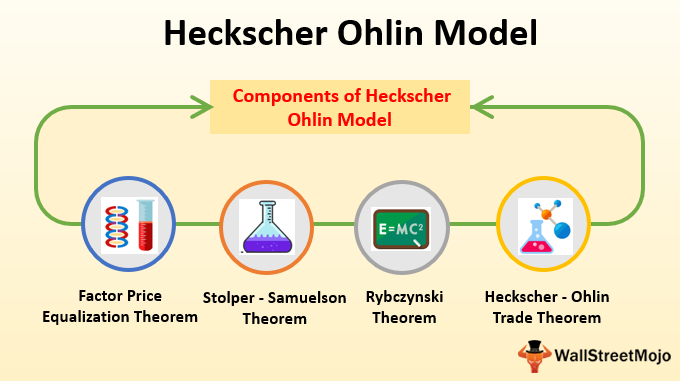 How is the Heckscher Ohlin Model Superior to Classical Theory?

Saudi Arabia holds around 18% of the world’s petroleum reserves and ranks as the largest exporter of petroleum and second-largest producer. Petroleum in Saudi is not only available in plenty but also closer to the earth’s surface. Hence, it is cheaper and profitable to extract petroleum in Saudi Arabia than from many other places. This can be taken as an example of the H-O model.

To sum up, this model postulates that countries export what they can produce abundantly or what they already in abundance of (reserves) and a country will have a comparative advantage in the good that uses its relatively abundant factor intensively. Though this model has been proven to be better than the traditional model, this model adopts assumptions that can hardly be expected to be fulfilled.

This has been a guide to what is the Heckscher-Ohlin Model and its definition. Here we discuss components, assumptions, institutions, an example of the h-o model. You can learn more about accounting from following articles –