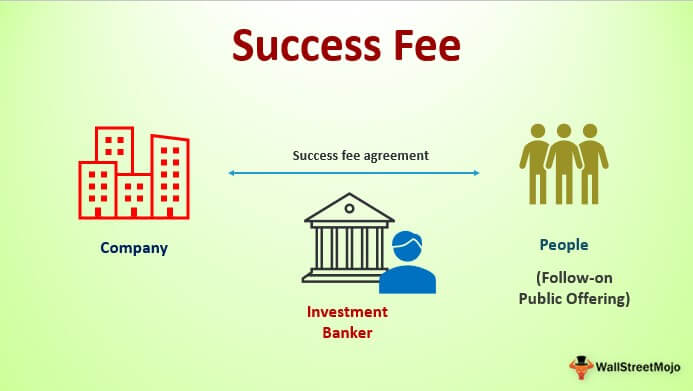 Success Fee is a contingent agreement which states that a fee will be paid if the outcome of the event is positive. If the outcome is not positive, then there is no obligation to pay the fee. This kind of fee structure is common in investment banking, where the investment banking team operates on a success fee basis. This keeps the team motivated to do their best and earn the maximum.

Investment banks act as a middleman when a company plans to raise fund from the public, tries to take over another company, plans for a merger or try to sell a segment. So companies enter into a Success Fee structure with the Investment bank so that the Investment banking team tries their best for the event to be successful. It is quite a common procedure as it relieves the company from paying a fixed fee, and the interest of both the parties are now aligned. Investment banks make a lot of money when they successfully complete a project. The fee acts as a gift for the hard work that the team performs.

How to Calculate the Success Fee?

This fee depends on the outcome. Say a company is planning to raise money from the public via FPO (Follow-on Public Offering). The company is planning to raise a minimum of $500M. They hired Goldman Sach to be their investment banker and put forward a success fee agreement. The agreement was that if the capital raised is below $500M, then the fee will be 2%, and if it is above $500M, then the fee will be 6% of the excess capital. So the Investment Banking Team will have to perform thorough research of the demand for the company’s share in public and do mock trading of the shares to determine the price and also determine the total number of shares to be issued.

Once all the decisions are made, and shares are listed, then the Success Fee will depend on the outcome. Say the total money raised is $650.

As the money raised has crossed the $500M mark, so the team is eligible for a success fee.

Company XYZ is planning to sell its Tourism Segment. The company is planning to start a new segment from the money and estimates that it will require $500M for the new segment formation. Company XYZ reaches JP Morgan to help them with the process. They plan to set up the fee structure on a success basis so that the interest of both parties are aligned.

If the sale amount crosses $400M, then a 6% Success Fee to be given on the excess amount.

The investment banking team started to research and found a potential buyer who will strategically gain from this transaction. The team calculated a superb synergy value for the buyer, and they agreed to pay $800M for the acquisition.

The deal was closed, and the company XYZ received $800M. So the project is a superb success.

The investment will receive a fee of:

The success fee can be paid by any organization that plans to execute a deal through an investment bank. This fee structure relieves the organizations to pay a fixed fee even if the deal was not successful. So many organizations opt for this structure to increase the probability of success.

There is no fixed range. It mostly varies from deal to deal basis. A typical structure could be:

This article has been a guide to Success Fee and its definition. Here we discuss examples, how to calculate, and who will pay the success fee along with benefits and drawbacks. You may learn more about financing from the following articles –