What is the Big Four?

Big Four refers to the top four accounting firms in the world that audit more than 80% of the US public companies and includes Deloitte, Pricewaterhouse Coopers, KPMG, and Ernst & Young. For these accounting firms, this term is used because of their huge size, good reputation and the worldwide reach in the field.

Although these companies are usually identified as single companies, each one of these accounting firms has a network of different independent corporations who, by entered into agreements, work with each other with the decided quality standards and the common name.

There are four companies which fall under this category are as follows: 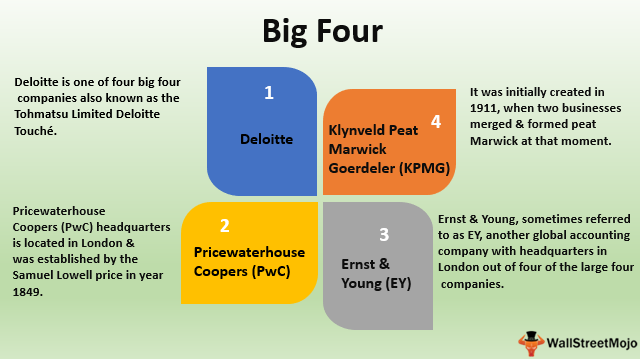 Deloitte is also known as the Deloitte Touché Tohmatsu Limited. The company is incorporated in the UK as an international firm for audit services. The company began its working as separate companies of four-person names as William Deloitte, Elijah Sells, Charles Haskins, and George touche out of which three companies merged and became Deloitte & Touche.

Presently the company primarily is known as Deloitte LLP having four subsidiaries named Deloitte & Touche LLP, Deloitte financial advisory services LLP, Deloitte Consulting LLP, and the Deloitte Tax LLP. Over the period, Deloitte bought out many companies and created them as its subsidiaries or merged them and became one of the biggest firms in the world, offering a wide range of employment opportunities. A person looking for a job in Deloitte can in any of the categories like consulting, tax advisory, financial advisory services, etc.

Headquarters of the Price water house Coopers (PwC) is situated in London and was founded in the year 1849 by the Samuel Lowell price began. Large selection of the services is being offered by the Pricewaterhouse Coopers to their clients, which includes auditing and assurance, consulting, tax-related matters, IFRS reporting, etc. All these provide a great opportunity to the current as well as the potential employees to work in different areas and find out their specialty within the same company.

KPMG is also known as the Klynveld Peat Marwick Goerdeler. It was established originally in the year 1911 as at that time, two companies merged and formed Peat Marwick. Three primary services are being offered by the KPMG, namely auditing, advisory services, and the taxes. These three services further can be broken in many of the sub-services and thereby making KPMG full-service firm. KPMG has a priority to build the culture which rewards a high level of performance and nurtures the talent.

Ernst & Young, which is also sometimes referred to as EY, is another international accounting firm out of four firms of the big four, having the headquarters in London. EY was formed by the merger of the two companies, namely Ernst & Ernst and the Arthur young and company in the year 1989. The company is located in various countries which counts for more than 150 have more than 700 offices all over the world. They offer multiple services, which include auditing and assurance, tax matters, advisement, transactions, etc.

#2 – For many of the large public companies, auditing work is being performed by these top firms.

Big 4, also known as final 4, are the four largest accounting and the professional services firms having an international presence. For the majority of the public traded companies, auditing work is being performed by these big four firms. These include Deloitte, Pricewaterhouse Coopers, KPMG, and Ernst & young. Apart from these, there are several other firms that provide a similar type of services but are small in comparison to them.

This has been a guide to what is the Big Four and its definition. Here we discuss big four accounting firms, including Deloitte, Pricewaterhouse Coopers, KPMG, and Ernst & Young, along with advantages and disadvantages. You can learn more about accounting from following articles –