What is Capital Loss Carryover?

Capital loss carryover is the benefit that has been extended to the taxpayers for claiming the capital losses that were incurred during the year, to be set off against the subsequent capital gains. As per US Tax Laws, net capital losses can only be deducted up to a maximum of $3,000 in a year in the case of an individual. The amount over $3000 needs to be carried forward to the next year till exhausted. There is no time frame within which such loss can be utilized.

For corporations, their capital loss must be utilized against the preceding three years of capital gains, and the unutilized capital losses need to be applied in the upcoming five years against capital gains.

There are two types of capital losses – short term and long term.

The reason for segregation is due to the different tax rates. 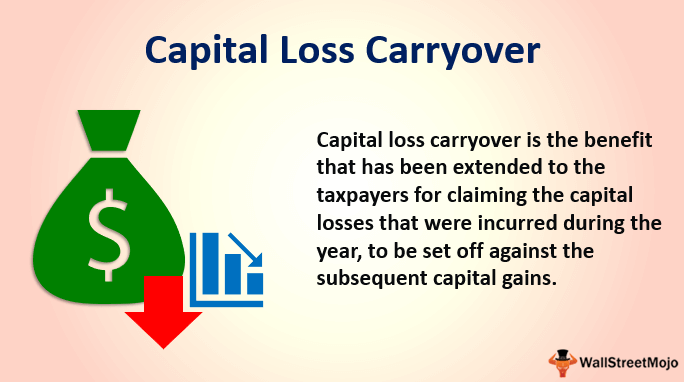 How to Calculate Capital Loss Carryover?

To determine the nature of our loss, we need to have the following data –

How to Claim Capital Losses?

Capital loss needs to be claimed in the IRS Form 8949, Sales and Other Disposition of Capital Assets, with your tax return. In addition to this, capital gains and losses and tax loss carryforwards are reported in Schedule D of IRS Forms also.

This article has been a guide to What is Capital Loss Carryover & its Definition. Here we discuss how to calculate the capital loss carryover and how to claim along with examples, formula, advantages & disadvantages. You can learn more about from the following articles –