What Are Franking Credits?

The franking credit is essentially a tax which is being paid by the companies or corporations before distributing the dividend payments, so the shareholders receive a tax credit and they depend on their tax structure they can get a refund or proportionate reduction in their income taxes; this also helps to avoid double taxation as the companies already pay the taxes before distributing the dividend.

It was developed way back in 1987 and is very familiar in the Australian tax system. This concept is also known as imputation credit, the company distributes profits as dividends among the shareholders, and the profit is taxable, so the company pays the taxes beforehand, and shareholders receive a tax rebate if the individual tax rate differs from the company.

So in a way, Franking credits promote long term equity investment, since the shareholders get the leverage of such credits and dividends it encourages them to invest in the company for the long term in equity, and in turn, the company can use those funds for further expansion.

How to Calculate Franking Credits?

Martin lives in Sydney and has a diversified portfolio into equities and bonds, but all the investments are domestic, meaning all are Australian companies. Out of the many companies, Martin has invested in Kookaburra, which is an Australian sports company that manufactures cricket equipment like gloves, pads, helmets, bats, and so on. Kookaburra earned handsome profits in the year 2019 and decided to distribute a portion of it amongst the shareholders in the form of dividends. Since Martin is a shareholder, he receives an AUD 700 as dividends after the tax paid by Kookaburra of 30%. However, Martin’s comes in the tax bracket of 15%, so the difference amount he received as Franking credits. 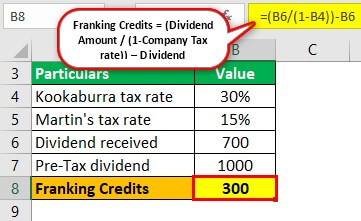 So, as per the calculation, Martin is entitled to pay only AUD 150 as his taxes on dividend. However, the company has paid AUD 300. Hence, the company gives Martin Franking credit of AUD 300. Martin can claim those credits after deducting his individual taxes of AUD 150; in this way, he can either get a tax refund of AUD 150 or get that deducted in his personal income tax amount. 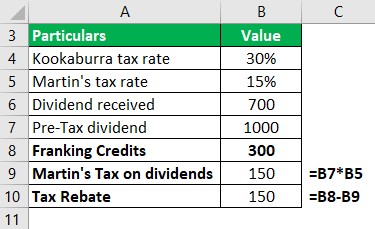 So, there are three basic steps in which the Franking credits work, and we will talk about it below:

This has been a guide to what is franking credits. Here we discuss a formula, examples, and how to calculate franking credits along with advantages. You may learn more about financing from the following articles –