What is Covered Interest Rate Parity?

As per the international parity conditions, it is theorized that if the required preconditions are met, then it is not possible to make a risk-free profit from investing in a foreign market which is giving a higher rate of return, one such condition for covered interest rate parity, the foreign security should be completely hedged.

There are various kinds of parity conditions that deal with the interlinking of measures such as the Current Spot rate, Forward exchange rate, Expected future spot exchange rate, Inflation differential, and Interest rate differentials.

Following is the formula for Covered interest rate parity: 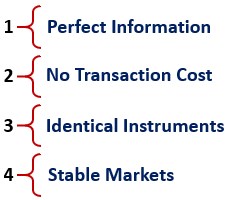 The parity condition assumes that there are no transaction costs related to investment in the foreign or domestic market, which could nullify the no-arbitrage situation

The domestic and foreign instruments should be identical in aspects such as default risk, maturity, and liquidity, etc. Capital should flow freely between markets to avoid liquidity constraints.

The financial markets should be not facing any kind of regulatory pressures or stress and must be working freely and efficiently.

Let’s say we are dealing with the USD/EUR currency pair for a European investor, for whom the EUR is the domestic currency and USD is the foreign currency, and we are given the following information:

Using the covered interest parity formula, we can solve for the forward rate.

Under covered interest arbitrage, we hedge our position, and therefore we take the following steps:

This has been a guide to What is Covered Interest Rate Parity (CIRP) & its Definition. Here we discuss the formula to calculate covered interest rate parity example along with assumptions. You can learn more about from the following articles –