What is the Current Portion of Long-term Debt? 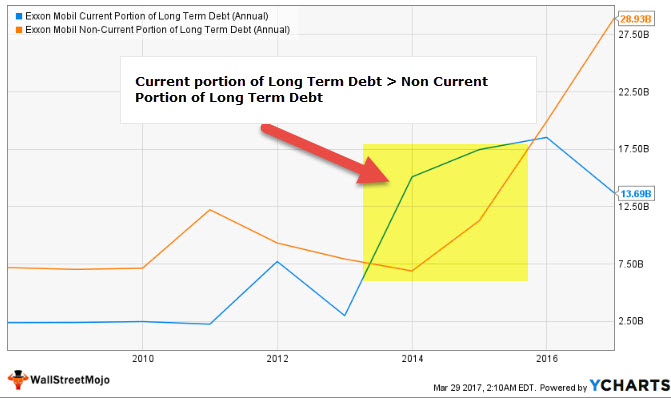 The snapshot below shows the balance sheet of SeaDrill Limited.

As observed in the graph above, the SeaDrill balance sheet doesn’t paint a good picture because its CPLTD has increased by 115% on a year-over-year basis. It is because SeaDrill doesn’t have sufficient liquidity to cover its short-term borrowings and current liabilities. In other words, SeaDrill has a high amount of current portion of long-term debt as compared to its liquidity, such as cash and cash equivalent. This suggests that SeaDrill will find it difficult to make its payments or pay off its short-term obligation.

Note: The thumb rule states that a company with a high number in its CPLTD as compared to a small cash position has a higher risk of default. 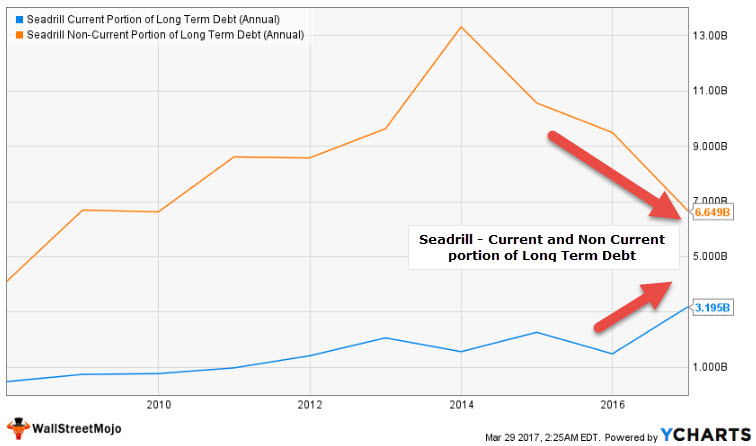 The same goes for SeaDrill that has a high number in its current portion of long-term debt and a low cash position. As a result of this higher CPLTD, the company was on the verge of defaulting. According to simplywall.st, SeaDrill proposed a debt-restructuring plan to survive the industry downturn. As per this scheme, the company plans to renegotiate its borrowings with the creditors and has a plan to defer most of its CPLTD.

However, this move had a negative impact on its share price performance because the company saw its share price falling more than 15% last month. In fact, this was the second announcement regarding its debt restructuring plan as the company was not able to please the creditors as per its earlier given date of December 30, 2016. This time the company has pushed the deadline to the end of April 2017.

In the case of SeaDrill, the company is not able to pay its CPLTD due to a historical weakness in the crude oil sector and poor market conditions. For instance, the crude oil prices fell more than 50% since the high of $100 per barrel in 2014 to close to $50 per barrel at present due to the oversupply of crude oil and increase in the inventories in the United States.

Debt is an important component of the company’s total capital. It creates financial leverage, which can multiply the returns on investment provided the returns derived from loan exceeds the cost of loan or debt. However, it all depends if the company is utilizing the debt taken from the bank or other financial institution in the right manner. Meanwhile, the current portion of long-term debt should be treated as current liquidity as it represents the principal part of the debt payments, which are expected to be paid within the next twelve months. If not paid within the current twelve months, it gets accumulated and has an adverse impact on the immediate liquidity of the company. As a result, the company’s financial position becomes risky, which is not an encouraging sign for investors and lenders.