What is the Foreign Corrupt Practices Act?

Foreign Corrupt Practices Act (FCPA) is a law made in the United States which provides provisions to stop the business persons from making payments in the form of bribes to the officials of a foreign government with the intent to secure business through such dealing.

FCPA was enacted in 1977 and further requires the entities to maintain sufficient books of accounts along with an assurance of internal controls. Such controls will provide reasonable assurance about the execution of transactions in a lawful manner, assessment of assets and accounting done through authorisation from the management. 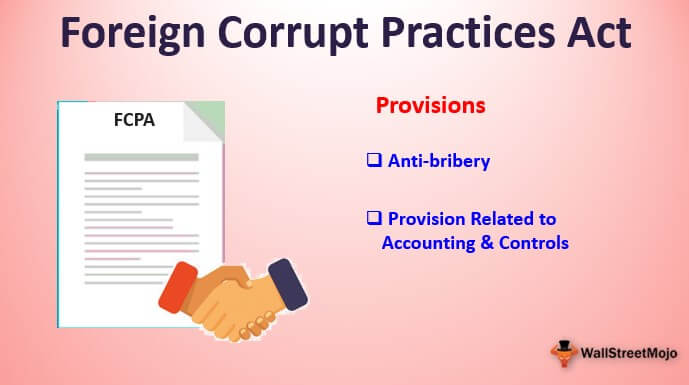 This provision provides a ban/prohibition on payment of bribes to foreign officials in the form of money or any monetary value or anything of value, with the intent of acquiring a business or retaining an existing business.

Violation of the Foreign Corrupt Practices Act has serious repercussions on the persons involved in the payment of bribes or any other provision of the act.

Applicability confirms the extent of the act to different persons. The Foreign Corrupt Practices Act applies to as follows:

This has been a guide to Foreign Corrupt Practices Act and its definition. Here we discuss FCPA purpose, requirements, provision and violation of foreign corrupt practices act along with its consequences. You may learn more about financing from the following articles –