Full Form of CAG – Comptroller and Auditor General of India 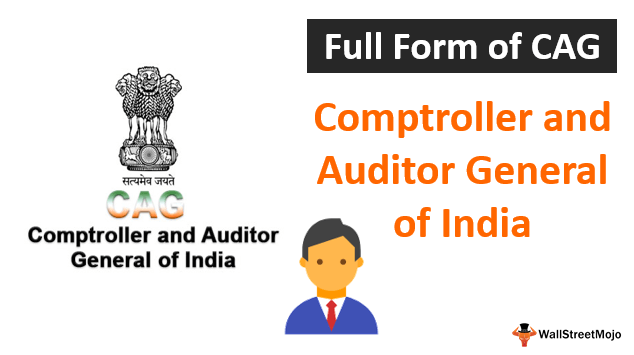 What are the Duties and Powers? 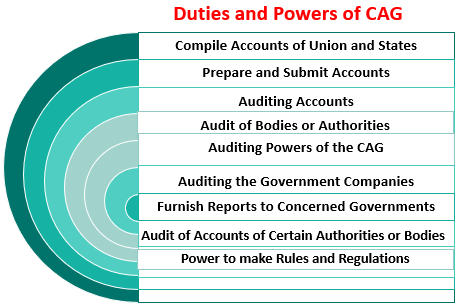 #1 – Compile Accounts of Union and States

The CAG is required to compile the Union and State governments’ accounts from the initial and subsidiary accounts. The initial accounts are kept with treasuries, offices, or departments of central and state governments, which are furnished to the Comptroller and Auditor General of India for compilation.

After compiling, the CAG prepares and submits the accounts to the President, Governors of States and Administrators of Union Territories having Legislative Assemblies, detailing the receipts and expenditure of the state and union government bodies

#4 – Audit of Bodies or Authorities

The CAG audits receipts and expenditure of bodies or authorities majorly financed from Union or State revenues. These bodies and authorities get loans and grants from the State and Union fund and have to be audited to ensure the right use of the funds granted.

#5 – Auditing powers of the CAG

The Comptroller and Auditor General of India have the authority to 1) inspect any office of accounts controlled by the Union or State government, including treasuries and offices responsible for the keeping of initial or subsidiary accounts, 2) call for accounts, books, paper, and documents concerning the audit to be furnished at his appointed place of inspection, 3) question the people in charge of preparing the initial accounts, or ask for more information to perform the audit.

The CAG should perform the audit of government companies in accordance with the provisions of the Companies Act, 1956.

The CAG should furnish the audit reports on state and union finances and government companies to the concerned government (state or union) to be tabled in the parliament and respective legislative assemblies.

#8 – Audit of Accounts of Certain Authorities or Bodies

The CAG is required to audit certain authorities and bodies which have not been entrusted to it if requested by the President of India, union or state government, or other administrative bodies.

#9 – Power to make Rules and Regulations

The Union Government, after consultation with the CAG, can make rules for maintenance of accounts by government bodies and authorities to be followed by their treasuries and accounting departments for appropriate furnishing of their accounts for compiling and auditing by the CAG. He is also authorized to make regulations concerning the applicability of the act under which it is governed.

The role is to ensure that the Union and State accounts are in order, free from misappropriations and errors.

Which are the Reports filed by CAG?

The Comptroller and Auditor General of India file the following three kinds of audit reports to be tabled before appropriate legislative assemblies, including the parliament.

What is the Salary of CAG? 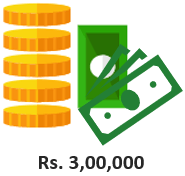 The CAG is paid a salary equal to that of the Judge of the Supreme Court. Additional perks are over and above the salary received by the CAG. They receive Rs. 3,00,000 as an annual salary (Rs. 25,000 per month).

Who is Currently the Comptroller and Auditor General of India?

The current CAG of India is Rajiv Mehrishi, IAS, appointed on 25 September 2017. Rajiv Mehrishi is the 13th Comptroller and Auditor General of India and Vice – Chairman of the United Nations Panel of External Auditors. He is an Indian Administrative Service (IAS) officer of 1978 batch belonging to the Rajasthan cadre.

The CAG has been instrumental in bringing out some of the most debated reports, including the report of the 2G spectrum allocation report, the coal mine allocation report, and the Fodder Scam. These reports have led to numerous litigations, cancellations of licenses, and convictions of prominent figures in politics and business.

This has been a guide to the full form of CAG and its definition. Here we learn the duties and powers of the Comptroller and Auditor General of India, its role along with salary. You may refer to the following articles to learn more about finance –