Crown Assets refer to certain assets or resources that are owned by the government of a country, democracy, or any ruling monarch of that particular country, having full rights over such assets that cannot be claimed by the public if otherwise sold.

Given below is how crown assets can be categorized.

Given below are some of the examples of assets that are owned by the government. 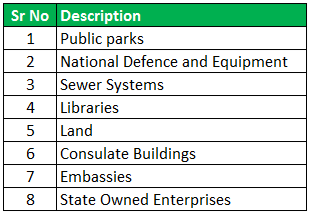 Given below are some of the ways in which crown assets are beneficial to the country.

Crown assets, no doubt, tend to benefit the country. However, there are certain assets that the government, though owned by them, cannot undertake a sale in times of distress such as roads.

Crown assets or the assets owned by the government tend to be an important factor contributing to enhancing the soundness, wellness of the country, thereby also building confidence among foreign investors to pump in money to any particular country. They tend to act as a strong backing force in times of distress and crisis. The government is well to do to use them efficiently and thus stand to manage the finances and resources of the country.

However, if the country tends to indulge too much into leverage and borrowing, there are high chances that the government may have to undertake a massive sale off of the various assets. Such measures stand to reduce the net worth of the country and also happen to hamper confidence.

It stands as a red signal to the world. However, if the economy is prudent enough and efficiently uses such crown assets for the greater good of the public and betterment of the society, these crown assets will no doubt contribute to the development of the nation as a whole.

This article has been a guide to Crown Asset. Here we discuss how crown assets can be categorized along with the examples of assets that are owned by the government. You can learn more from the following articles –