In this article, we will investigate the investment banking market in Brazil and try to answer all of the above questions. Let’s look at the sequence of the article.

In this article, we will talk about the following – 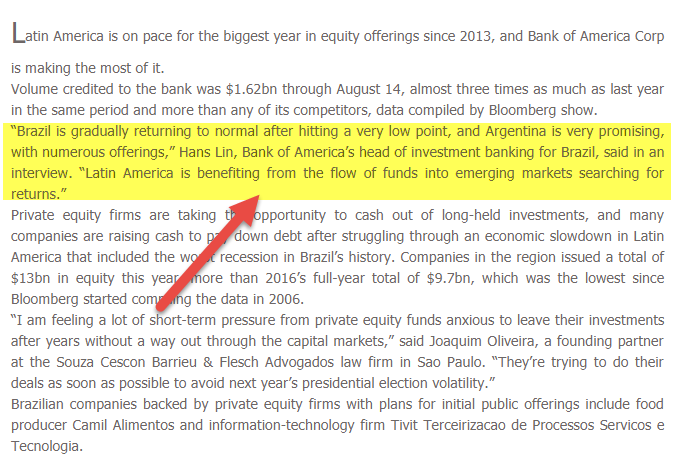 These are the few snippets of the investment banking market in Brazil. Let’s look at the services offered by these banks.

As already mentioned, investment banks in Brazil mainly deal with two kinds of deals – restructuring and M&A deals. But other than that, they also execute deals that revolve around the capital and debt market.

Now, let’s look at the list of top banks in Brazil.

According to Global Banking & Finance Review, here’s a list of investment banks that stand out in the crowd in the year 2012 –

We will now look at the 2016 rankings in M&A deals given by the Leaders’ League. They divided the top investment banks again in four labels – leading, excellent, highly recommended, and recommended –

Leading: Under “leading”, here are the top investment banks in Brazil –

Excellent: Under “excellent”, the top investment banks are –

Recommended: Under “recommended”, these are the banks that made their mark –

As the team is smaller in small investment banks in Brazil, the ratio of deals per person is also much bigger. Every analyst/associate normally handles 5-6 deals at a time which is too much. As a result, no-one could focus on one big deal properly.

In large investment banks in Brazil, things are much more difficult to handle. During a certain period, every analyst/associate handles 8-9 deals at the same time.

The culture of the work is quite hectic and you would always be running for deals, reports, sourcing, presentations, and LOIs. And as the team is smaller, work pressure is much more. That means you can go to anyone (MDs, EDs, VPs), asking for anything. And at the same time, you need to take personal responsibility to close the deals. There’s almost no social life due to work pressure.

Also, have a look at Investment Banking Lifestyle

The investment banking salaries in Brazil are not exciting. If you consider the exchange rate of Brazilian Real with United States Dollars, you would see that 1 Real means only 0.30 USD.

Now, let’s look at the average investment banking salaries in Brazil first and then we will discuss further. 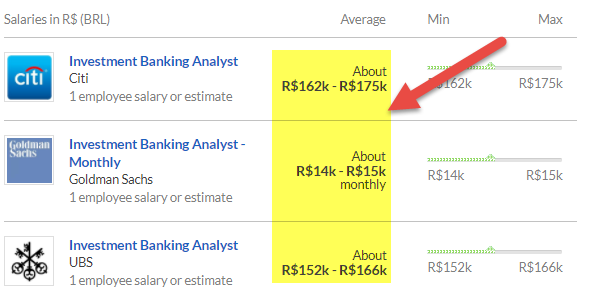 When investment bankers all around the world are earning at least six figures, salaries in Investment Banking in Brazil really looks dim. However, for local candidates maybe this is a great compensation.

People in Brazil don’t look for exit opportunities most of the time. Because, it’s hard to get into investment banking and in private equity, there are fewer chances of career growth.

In private equity in Brazil, people get hired directly out of college and they get paid pretty less. So, you can understand why investment bankers don’t like to go into private equity.

Investment banking in Brazil is tough. If you’re a foreigner and you would like to get a job in investment banking, it would be almost impossible. However, if you can master the local language and can have an extraordinary track record, you may crack the nut and land an offer.

This has been a guide to Investment Banking in Brazil, their services offered, recruitment process, their culture, top investment banks in brazil, salaries, and exit opportunities. You may also have a look at the following article for learning more about Investment Banking