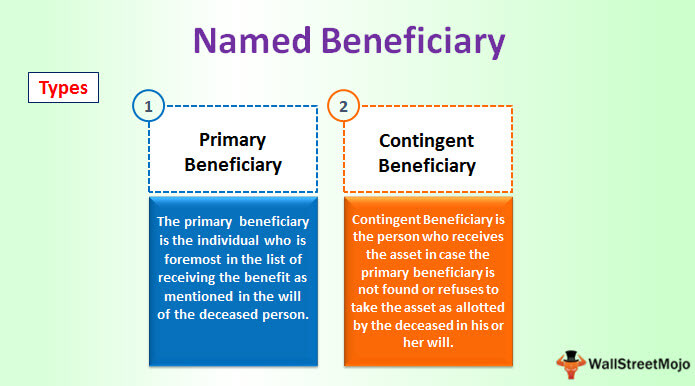 What is Named Beneficiary?

Named Beneficiary is a person whose name is recorded on the legal documentation by the force of law or a decree. This person is the sole or shared collector of benefits from the trust, insurance policy, pension plan, annuity etc. If there is more than one named beneficiary, all will share the asset equally or as per their defined share in the legal document or will.

Sometimes an estate can be a beneficiary instead of an individual. There is a difference between heir and beneficiary; the heir gets the asset as a successor while the beneficiary gets his or her share if their name is on the will.

In the case of a financial instrument like an annuity, the beneficiary and the policyholder can be the same individual. Appointing a beneficiary comes with certain advantages like tax advantages and skipping probate processes, which ultimately leads to speeding up of the asset distribution process.

Sometimes the owner can mention estate like some non-profit organization or NGOs as the primary beneficiary in the will instead of an individual.

Refer below the snapshot of the beneficiary designation form for the life insurance policy. By reading the first paragraph, we can easily comprehend that a person can appoint more than one primary as well as a contingent beneficiary. Though, no primary beneficiary can be the contingent beneficiary as well. Also, in case an estate like a charity organization or trust is mentioned as the beneficiary, full details regarding the address and the date of its creation should be mentioned. Lastly, in case the owner is married and the spouse is not mentioned as the sole primary beneficiary, spousal consent is writing would be required. 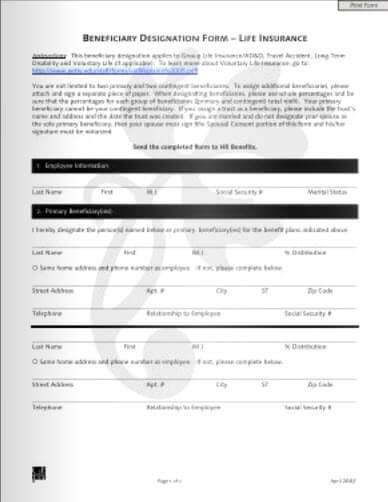 There are several risks that should be kept in mind by the owner or should be detailed to the owner by a legal advisor when she or he makes the will and designate a primary and contingent beneficiary. Some of the risks are mentioned as below:

The above are just a few examples. To sum up, asset owners should very carefully, with the help of their legal adviser, fill the named beneficiary form, to avoid any hassle in the distribution of assets after their death. Also, they should review and update the beneficiary’s names after every major life event like divorce, marriage, or death of a primary or contingent beneficiary before the owner.

This has been a guide to What is Named Beneficiary & its Definition. Here we discuss the types of named beneficiary, risk, and importance along with examples and advantages. You can learn more about from the following articles –