What is Tax Fraud?

Tax fraud is defined as an activity that entails an attempt to avoid payment of tax by wilfully using wrong means and it occurs when an individual intentionally and illegally tries to falsify his actual income or other details to get rid of tax liabilities. It is also known as tax evasion and is illegal.

Frauds occur when there are loopholes in the system we follow. It is a prerequisite of an individual to have a thorough and updated knowledge of the laws and compliances of the country where he works or does business. One of the most important laws is Tax Laws. Tax Laws are different for different countries, but one must be aware of the changes in tax laws. Every businessman or any salaried individual thinks of reducing his tax liability. Although there are some legal and safe methods of reducing the tax liability, some prefer to go with the illegal path and thus end up committing a Tax Fraud.

There are 3 main types. Let’s discuss them one by one: 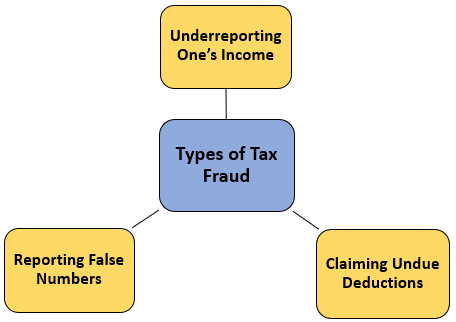 This type of tax fraud is prevalent, especially in the case of people who receive their income in the form of cash. The Internal Revenue Service (IRS), as well as the state tax boards, requires all kinds of income to be reported irrespective of its source. However, since it is challenging to trace cash income, it can go unreported quite often.

This fraud attracts legal punishment, which ranges from 2 yrs in jail to up to $250 thousand fines.

Faking the financials is another type of tax fraud. Using incorrect numbers is directly taken equal to falsifying a document or making a false statement by the tax authorities. This fraud can be prevented by companies and individuals by using certain checks and balances, which can also be used by tax authorities to catch the same. Once caught, this can attract penalties like jail for a few yrs and up to $250 thousand fines.

In this type of fraud, people claim deductions, credits, and/or expenses that are not due to them. The person caught doing this can also be sentenced to jail or charged with hefty fines.

Following are some simple, straight forward but real-life examples of tax fraud: 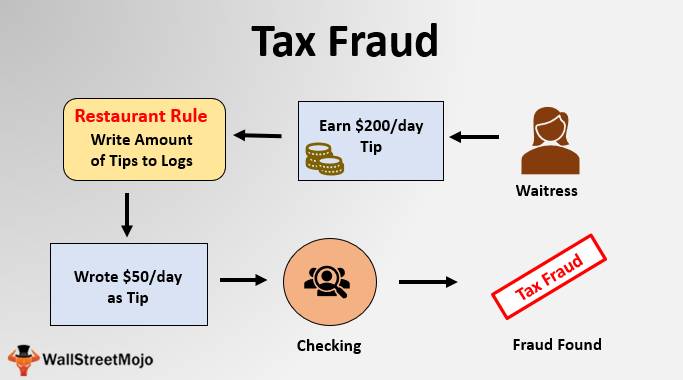 The above 2 types of examples are prevalent and can be found easily in the archives of the income tax department of any country.

In the year 2005, the FBI found Walter Anderson, an American entrepreneur, to be involved in the act of a massive tax evasion case, one of the largest in the history of the United States. In the early 1980s, Walter became an entrepreneur and bought the shares of many companies. Later he sold his shares and made a good profit. Coming to the year 1988, he became very successful and became a member of the board of directors of the International Space University. The success story of Walter continued, and he went on to invest in larger ventures, especially in the field of space technology.

However, while he was doing everything right in his business, he was doing something grave. It was found by the FBI on investigating his nearly 2-decade-old business activities that Walter was siphoning his money to bank accounts in other countries.

On being arrested, he admitted to having hidden north of $365 M in secret accounts out of the US. For this fraud, he was sentenced to prison for 6 yrs till 2012. On top of that, Walter was asked to pay $23 M by the court to the district government.

Tax fraud is the act of avoiding taxes illegally. The government has taken up lots of efforts to reduce tax fraud. They have applied a heavy penalty on a sum that is being concealed by the assessee willfully. Individuals can invest in lots of schemes to get tax benefits legally and should not opt for tax evasion.

Proper tax planning is key to the successful economic condition of any business. We all should emphasize on proper tax planning rather than resorting to tax frauds. According to the report submitted by Internal Revenue Service (IRS), almost $458 billion/year amounted to tax evasion between 2008 and 2011, which is a huge amount and can hamper our economic growth. The government should take the necessary steps to prevent the occurrence of the same.

This has been a guide to what is Tax Fraud and its definition. Here we discuss the top 3 types of tax frauds along with examples and detailed explanations. You can learn more about accounting from following articles –