Article byDheeraj Vaidya, CFA, FRM
Advertiser DisclaimerWallStreetMojo is a participant in the Amazon Services LLC Associates Program, an affiliate advertising program designed to provide a means for sites to earn advertising fees by advertising and linking to amazon.com
Some of the links on this page will take you to products that we think you'll like. There is no additional cost to you, and it helps us earn money so we can continue to supply you with useful information.

George Soros is an established Hungarian-American investor who has witnessed decades of changes in the Global Economy. He commenced his career by taking various jobs in England as a Merchant banker before starting his hedge fund business. It was the success in this area that he further expanded his career as an Author and Philanthropist. Some of the best books of George Soros to read in 2021 are:

Let us discuss each of the George Soros books in detail along with its key takeaways and reviews.

You are free to use this image on your website, templates etc, Please provide us with an attribution linkHow to Provide Attribution?Article Link to be Hyperlinked
For eg:
Source: George Soros on Finance (wallstreetmojo.com)

#1 – The Alchemy of Finance

This is regarded as one of the most powerful books of George Soros on finance and economics. It is recommended for:

There is a clear description of his understanding of the World and markets through the “Theory of Reflexivity” and how his decision-making skills in trading operations always have an underlying belief about the potential outcome of events. There is the usage of non-technical methods for forecasting the dynamic interplay and market participants. Some of the other interesting analyses are:

#2 – Soros on Soros: Staying Ahead of the Curve

This book of George Soros is an interview-style narrative with some of the established names in the financial world. There is a beautiful connection between Personal experiences, political analysis, and moral reflection to offer a complete picture to the global markets.

In describing the investment theories and investment strategies that have made Soros a “Superstar among money managers,” a fascinating story of the highly successful Soros Fund Management and its $12 billion flagships, Quantum Fund is described. The book also offers fresh insights into some of the most established victories and losses, including the $1 billion made up against the British pound and the fortune he lost while making Speculations on the Yen. Additionally, there is also a take on the Devaluation of the Peso and International 1currency fluctuations.

#3 – The Crash of 2008 and What it Means: The New Paradigm for Financial Markets 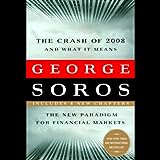 Through his vast experience, George Soros has given a detailed description of the origin of the 2008 Financial CrisisFinancial CrisisThe term "financial crisis" refers to a situation in which the market's key financial assets experience a sharp decline in market value over a relatively short period of time, or when leading businesses are unable to pay their enormous debt, or when financing institutions face a liquidity crunch and are unable to return money to depositors, all of which cause panic in the capital markets and among investors.read more. The theory on Reflexivity argues the actions taken by a market for understanding the marketability to understand the situation.

The book argues the importance of market regulation and the equality of information. These have been supported with a detailed history of actions for several of the past US crashes.

The final chapters provide recommendations of what the Global financial authorities should do to rectify the crash and steps undertaken in collaboration with other hedge fund managers.

This book of George Soro highlights various complex issues and situations which are plagued by globalization and broken down to granular levels for readers to have a clearer understanding. Many institutions have failed to keep pace with the growing economy, and a new dimension is offered for bringing the economy back on track.

Soros has successfully expressed some intelligent advice on dealing with the financial aid to underdeveloped nations and conditions to be enforced by countries such as the U.S. and Great Britain and the role of the IMF and World Bank. Overall, the book has focussed on a Capitalistic view and not a Socialist one.

#5 – Financial Turmoil in Europe and the United States

This book of George Soros takes the readers on a journey of real-time economic policy work and experimentation. The current economic situation faced is not solely on the basis of economic forces but various policies that have been pursued/not pursued by the global leaders.

Specific to the 2008-09 financial crisis, Soros explores the domestic and international policy choices which could have prevented the implosion of Fannie MaeFannie MaeFannie Mae, i.e., Federal National Mortgage Association is a United States government-sponsored enterprise (GSE) which was founded in the year 1938 by congress to boost the secondary mortgage market during the great depression which involves financing for the mortgage lenders thereby providing access to affordable mortgage financing in all the markets at all times.read more and Freddie Mac. Some of the other highlights of this book are:

#6 – The Age of Fallibility: Consequences of the War on Terror

Through this essay, Soros expresses his core views, i.e., Democracy, Human rights, and Open Society, and his differences with President George Bush against whom he was in the 2003-04 elections.

It is insightful into human fallibility that has been destroying the legislative processes. The political fallout of this intentional path is at hand, such as the polarization of Muslim factions by Bush and how he could have held the Arab world to accountability with the developed nations helping them.

While Bush’s rhetoric may have caused substantial damage, Soros sinks into quasi conspiracy and sinister theories instead of recognizing actions for what probably they are, i.e., difficult actions based on imperfect information in an uncertain world in the aftermath of 09/11.

#7 – The Tragedy of the European Union

The European Union has collapsed massively in the last decade, and if the downslide is not stopped, the member states may soon turn rivals. This will cause global turmoil through serious political and economic consequences.

George Soros has offered vigorous commentaries on how the Euro crisis was not due to the Integration of nations but a result of avoidable mistakes in Politics, Economics, and Finance. He also stressed the fact that there was excessive faith in the self-regulation of financial marketsFinancial MarketsThe term "financial market" refers to the marketplace where activities such as the creation and trading of various financial assets such as bonds, stocks, commodities, currencies, and derivatives take place. It provides a platform for sellers and buyers to interact and trade at a price determined by market forces.read more, which inspired flawed institutional structures calling out various reforms.

However, Soros has maintained faith in the European Union as a model of an open society, which is a testament of his vision towards a Productive and Peaceful Europe.

#8 – The Soros Lectures: At the Central European University

This book of George Soros is a consolidation of 5 lectures that were delivered at the Central University of Budapest. The reflexivity hypothesis is laid out, giving specific examples resulting in collective, subconscious creation and reinforcement of our individual realities. These lectures highlight a collection of Practical and Philosophical reflection.

This has been the list of Top Best Books of George Soros along with their key takeaways. If you wish to learn more about Investment Banking, you may refer to the following books –