What is a Financial Crisis?

Financial Crisis describes a situation when the key financials assets of the market see a steep decline in market value in a relatively very short interval of time, or when the leading businesses are unable to pay their huge debts, or when financing institutions face a liquidity crunch and are unable to give the money back to the depositors, which lead to panic in the capital markets and investors.

The panic created in the market due to this crisis can lead to several other events that can further deteriorate the market sentiments. For example, investors can go on selling their stakes or can withdraw the money from their savings accounts with banks out of fear of bank failures.

There are several key events as well that can be classified as Financial Crisis: 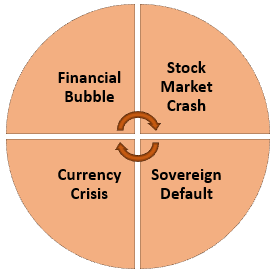 A financial bubble is a part of the economic cycle in which the prices of the assets increase very rapidly and suddenly crash. In this case, assets are generally overvalued and are not supported by the fundamentals of the asset, generally due to the exuberant behavior of the market. When none of the investors are interested in investing further, the price crashes, and it is called “bubble burst.” There have been many such events in the past, such as the Dot Com Bubble Burst, the US Housing Bubble burst, etc.

Similar to the financial bubble, there are situations when instead of one asset alone, the whole markets suffer the burn and crashes after making huge gains over the period of time. It can be due to the regulation changes by the government or eco-political situation of the country, or other similar reasons that impact the whole market.

At times, the currency of a country gets devalued suddenly by a huge amount against other currencies; it is called the currency crisis. It often leads foreign investors to pull out their money from the market because, in the local currency, the value of their investment gets decreased. Also, sometimes governments themselves try to devalue their currencies in order to increase the exports. But this measure is not a part of the currency crisis as that involves non-purposeful events only.

Examples of the Financial Crisis

Below are real-life examples of the financial crisis: 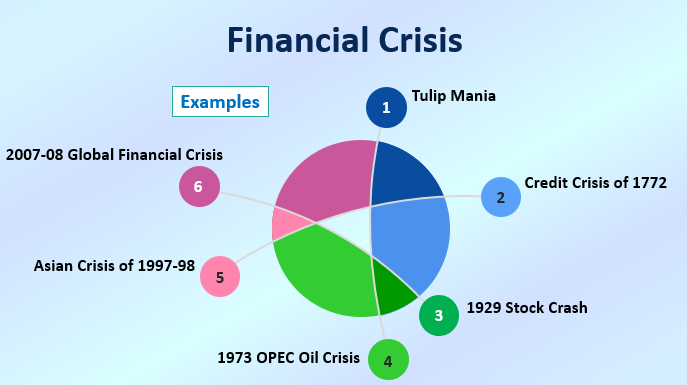 This is among the first few financial crises that the world has seen. In the 17th century, merely by the speculations, the prices of the bulbs of fashionable tulips soared and then suddenly collapsed. It led to huge losses for Dutch craftsmen as they were the ones who started hoarding the same, expecting the prices to increase.

As the credit expanded rapidly for a long period, it led to a crisis in London. A partner of a large bank kept shorting the shares of the East India Company, and at the time of payment, he fled to France. The panic spread throughout Europe and led to bank runs, not just in London but other major cities of Europe as well. Many people believe that it was because of this crisis that new tax legislation Boston Tea Party originated and caused unrest in America

After wild speculation of a bullish run, the stocks collapsed suddenly due to oversupply of specific commodities. The crash led to the Great Depression, and its impact lasted for more than a dozen years. This depression resulted in the introduction of many rules and regulations to control the stock markets.

To punish the supporters of Israel, OPEC member countries started an oil embargo due to which prices of a barrel of oil increased to USD 12 from USD 3. Oil is an essential raw material for many key industries. This increase in prices led to stock markets across the world getting crashed.

This crisis started with the collapse of the Thai currency Baht. Thai Government was forced to abandon the US Dollar pegged value and let the currency float. It led to a massive devaluation of its currency, and the impact spread out to other key Asian economies, including Japan as well. Because of this, the debt-to-GDP ratio of these countries increased, causing a global panic.

It is considered as the worst financial crisis since the 1929 great depression. The banks across the US had most of their loans and investments in the Real Estate sector as the housing industry was seeing a boom. But after a point, the customers started defaulting on their loans, and banks started collapsing. Lehman Brothers were the first investment bank to collapse. US Government had to provide huge bailout packages to save the economy.

Causes of the Financial Crisis

Thus, the financial crisis has been a part of the global economy for very long. Though they often lead to huge losses for the investors, they also lead to correction in the market when assets get overvalued, and they also compel the regulatory agencies to bring in more regulations to increase market efficiency.

This has been a guide to What is Financial Crisis & its Meaning. Here we discuss the types of Financial Crisis along with examples and also discuss its top causes. You can learn more about from the following articles –