Declaring a variable seems pretty simple, but to have good hands-on them, we need to understand the scope of those variables. Often we declare the variables for each macro inside the subprocedure every time. But by declaring one variable, we can use it in all the macros in the same module and the other modules of the current VBA project. In this article, we will show you how to declare Global Variables in Excel VBA.

What are Global Variables in Excel VBA?

We usually declare the variable inside the subroutine in VBA by using the word “Dim.”

Look at the above image. I have declared the variable “k” as integer inside the subprocedure Global_Example1. 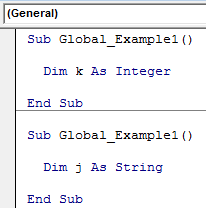 How to Declare Global Variable in VBA?

The following are the ways to declare a global variable in excel VBA.

As we have seen, we cannot use the subprocedure variables in any of the modules. To make them available for all the Sub procedure in the same module, we need to declare the variables at the top of the module. 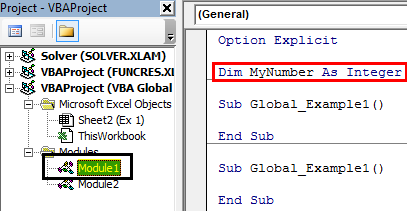 The problem is we cannot use them in any of the other modules. In this case, the variable “MyNumber,” declared in Module 1, cannot be used in Module 2.

Now we have seen two kinds of variable declaration and the scope of them while using. The exciting thing is we can declare the variable in any one of the modules and use it for all the Sub procedures in all the modules of the same VBA Project.

In the above image, you can see I have used the word “Public” to declare the variable instead of our veteran word “Dim.”

In the above screenshot, I have declared the variable in Module 1. I have two more modules, named Module 2 & Module 3.

Since I have declared the variable using the word “Public” at the top of the module, now I can access these variables in any sub procedure across any module of the same workbook.

Not only “Public,” but we can also use the word “Global” to declare the variable.

Global & Public are the two keywords to declare the variable and make them available across modules in VBA.

This has been a guide to VBA Global Variables. Here we learn how to declare global variables in Excel VBA along with practical examples and a downloadable template. Below you can find some useful excel VBA articles –