VBA Variables are like an address for storage of data and data can be in many forms like numerical or string or characters etc. so how does a code know what value or data to be stored in which variable, this is done by different variable types or also known as data types which are used to store the data as per type, for example, a string variable type will store string value while an integer data type will store an integer value and so on.

In order to code efficiently, declaring variables and assigning data types to those declared variables are key to go a long way in VBA coding.  In this article, we will show you what variables is, what data type is, and how to assign a data type to those variables.

As the name itself says, the variable will varies from time to time, and we store some value into those variables. To understand this better, let’s remember our “mathematic” classes, where we assume variable “x = something,” so whenever we use the “x” variable, it would be equal to the value we have assigned. 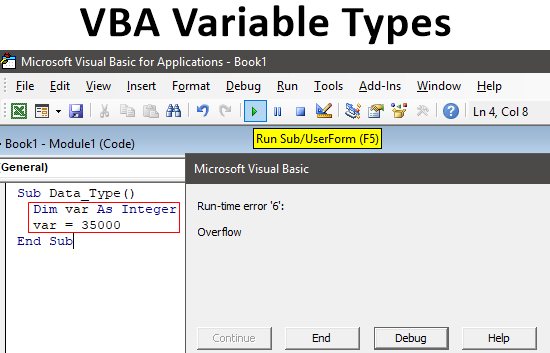 What is Data Type?

The data type is the restriction we put on hold the variable. For example, for the declared variable, we can restrict to hold only “Date Values,” “Integer Values,” “Long Values,” “String Value,” etc.…

The types of data that a variable may hold is called “Data Type” in VBA.

It has many types. In coding, it is important to understand what each data type can hold. We can classify the data types in two ways i.e.

How to Define Variable & Assign Data Type in VBA?

We can declare the VBA variable implicitly, i.e., without using the “DIM” word. Dim stands for “Dimension.” For example, look at the below image.

This is a proper way of declaring a variable. I would call it an official and professional way. To declare a variable, we have to use the word “DIM” and assign a data type to the variable.

We have defined the variable “k” as you can see in the above image and assigned the data type as “Integer.”

To define any variable, we need to first use the word “Dim” and followed by a variable name.

Next, once the variable name is given, we need to assign a data type. As we discussed above, we can assign any data type.

I have assigned the data type as an Integer. So now you need to remember the limitations of the Integer variable, i.e., it can hold values between -32768 to 32768.

In the above image, I have assigned 25000, which is well within reach, but the moment you enter the value more than the limit, it will cause an overflow error in VBA.

Now you can run this code using shortcut key F5 or manually to see the result.

Overflow is nothing but the assigned value of data type is more than its capacity.

Similarly, we cannot assign different values also. For example, we can not assign the “String” value to the integer data type variable. If assigned, we will get “Type Mismatch Error.”

Now run this code through shortcut key F5 or manually, to see the result.

This has been a guide to VBA Variable Types. Here we discuss how to define the variable and assign data type in Excel VBA with the help of practical examples and a downloadable excel template. Below you can find some useful excel VBA articles –