As you Know, VBA is used to record & run macros and automate the excel tasks, and do repetitive tasks faster & accurately.

In the context of the excel worksheet, the VBA range object denotes cells, either single or multiple. The range object can include a single cell, an entire row or column, or multiple cells spread across rows & columns.

In order for VBA to run the macros & do the tasks, it needs to identify the cells on which the called tasks need to be performed. It is here, the concept of Range Objects finds its usefulness. 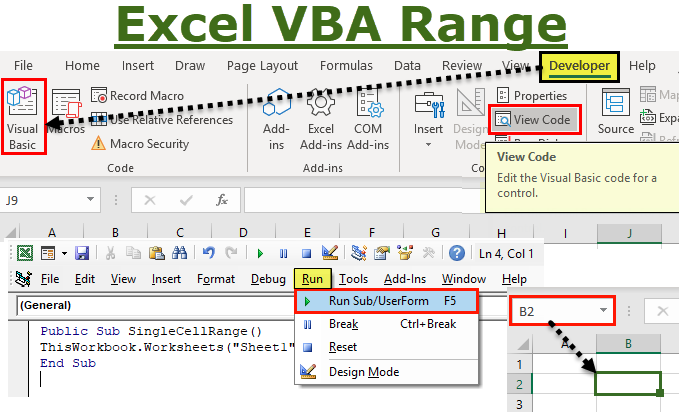 How to use the Range Object?

To refer to the objects in VBA, we use the hierarchical technique. There is 3 hierarchy:

For example, for Range, the method will be actions like sorting, formatting, selecting, clearing, etc.

This is the structure that is being followed whenever a VBA object is referred. These 3 are separated by a dot (.)

Example #1 –  Referring to a Single Cell

Let’s suppose we need to select the cell “B2” in the “sheet1” in the workbook.

You will see a screen similar to below:

Now, write the code, as shown in the below screenshot.

See in the excel screenshot below that currently, cell A2 is activated. After you run the code, note where the activated cell is.

Run the code like shown in the below screenshot:

Tip: You can also use the excel shortcut key, i.e., F5, to run the code

You will see cell “B2” is selected after the execution of the program.

Similarly, you can use the syntax to do the selection of a wide variety of cells & ranges and also do a different kind of actions on them.

For example, here to select the second row. Run the below-given code to select an entire row

Here the range(“2:2”) signifies the second row. You can return to your Excel worksheet and see the results, as shown in the screenshot below.

For example, here to select the entire column C. Run the below-given code and see the results.

After entering the above-given code, you will see the entire column has been selected in your excel worksheet. Refer to the screenshot below.

Similarly, you can select continuous cells, or non-contiguous cells, an intersection of cell ranges, etc.

Just make the below changes to the Range part shown in the code. 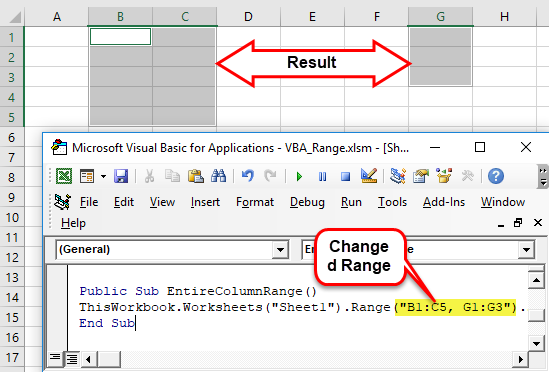 [Note the absence of comma here]. Here you will see G1 to G3 getting selected, which are the common cells in the provided range. 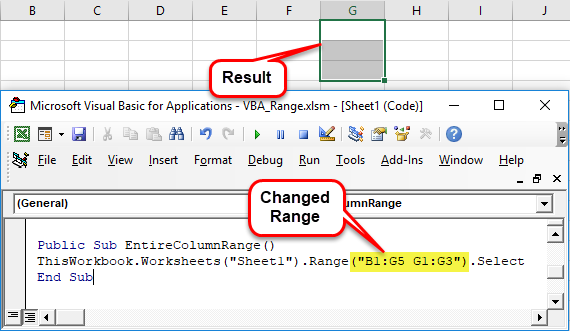 Now, the next example will be to select a group of cells in the worksheet and merge them into one cell.

Example #7 – Merge a Range of Cells

Suppose you want to merge cells “B1:C5” into one. See the below-given code and follow along. 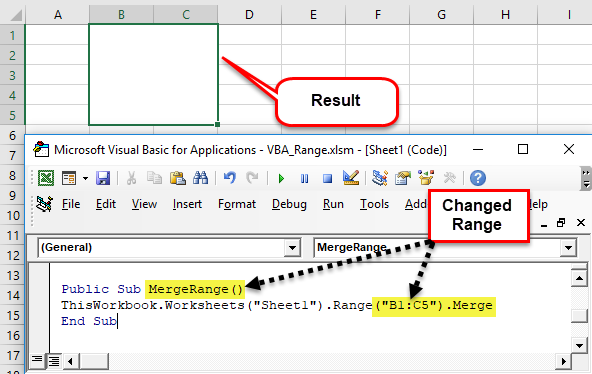 Here “.merge” is the action we are performing on the group of cells given in a range.

Example #8 – Clearing the Formatting on Range of Cells

Suppose cells “F2:H6” are highlighted in yellow, and we want to clear that excel formatting. Another scenario maybe, you want to remove all the formatting either in the entire worksheet or from a group of cells.

See the screenshots below to follow along. First, I will show you the formatted cells (F2: H6).

Please run the codes shown in the screenshot below to remove this formatting in the selected range of cells.

You can refer to this screenshot given below:

Similarly, you can clear the contents of a range of cells by using the action “.ClearContents.”

There are many such things you can do. Please try them to learn better.

This has been a guide to VBA Range. Here we learn how to select a particular cell and range of cells with the help of VBA range objects and examples in excel. You may also have a look at other articles related to Excel VBA –