What is Voodoo Economics?

Voodoo economics, popularly used by George H. W. Bush, to derogatorily refers to an economic policy followed by President Ronald Reagan that aimed at reducing the government spending, reducing taxes on income and capital gains and controlling money supply in the market in order to reduce inflation with the aim of improving the economy of the country.

In order to improve economic conditions which had been a slowdown in 1976, Mr. Ronald Reagan President of US in 1981 imposed Voodoo Economic policy and according to that policy, to control inflation and improve money supply in the market he reduced the taxes on income and reduced the government spending to improve slowdown economy.

The main aim of the policy was to reduce inflation, simplifying taxation, reduce regulations, and reduce government spending so that people encouraged to invest and save money. After its implementation, this policy worked and showed improvement in the GDP of the US and resulted in the generation of employment opportunities, which resulted in improved economic conditions.

How does Voodoo Economics Work? 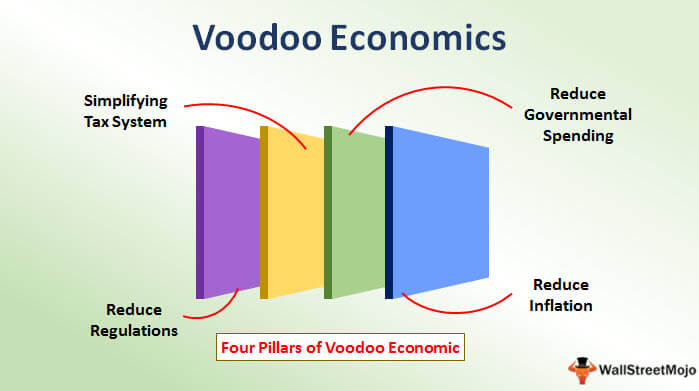 There were four pillars of Voodoo Economic which are

Through Voodoo economic policies taxation system of US was simplified by reducing the tax rates for the highest-earning group from 70% to 28% and by lowering corporate taxes from 48% to 34%, By amending the exemption criteria for poor and low income grouped people, by increasing the rate of excise duties and eliminating deductions from income and this resulted in people started saving and investing more as due to saving from reduced tax rates and this improves the money supply in the market and economic conditions and standard of living started improving which results in higher GDP of the nation.

As far as Government expenditures are concerned, unwanted social spending reduced, which was diversified towards defense and military expenditures, but due to huge defense expenditure, the debt of the nation increased for the short term. Also, the US gets the benefit of spending huge on military and defense due to which it becomes one of the strongest countries of the world with the latest and high power technology and strong and well trained military force.

Before the Presidentship of Mr. Ronald Reagan, the US economy was not so good, and inflation was very high. Mr. Ronald Reagan introduced the Voodoo economic policies through which is aimed at controlling inflation and improving the economic conditions and GDP of the nation.

As in Voodoo Economic policies Governmental spending controlled, income tax got simplified, deregulation of policies was made, and inflation was reduced, and this resulted in improved economic conditions which can be understood from the following example:

So earlier XYZ ltd was liable to pay, for example, $48,000 of tax on the income of $ 100,000, but now after Voodoo economic policies, it is liable to pay $ 34,000 i.e., saving in tax around $ 14,000. XYZ spent this saving on the expansion of the company for which it employed 50 new employees, and this resulted in employment generation in the US. Now, as employment opportunities increased, the standard of living of people and spending power starts improving, and eventually, GDP increased.

And Mr. A one of the largest investor has noticed that price shares of XYZ Ltd. are increasing day by day in US Stock market and he started investing in XYZ Ltd in US Stock market from which he earned a decent return on investment, and this benefited Mr. A, and XYZ Ltd both as Mr. A earned a decent return on investment, and XYZ Ltd got the global recognition and interest of foreign investors.

Voodoo Economy is the economic Reform policies which were framed under the Guidance of President Ronald Regan which aimed to improve the economic conditions of the nation for this it has made the four pillars which are deregulation, minimizing governmental expenditure, tax rates, and inflation. These strong steps had been taken, which proved fruitful as the tax reductions resulted in employment generation.

The spending power of people got increased due to savings in taxes, and the overall economy started improving. Proper channelization of Governmental Spending resulted as the US one of the strongest nations in terms of military. De-regularization resulted in an increase in exports and a decrease in imports and reduced inflation resulted in improved money flow. The policies are praised by the overall world and make the US one of the largest economies.

This has been a guide to What is Voodoo Economics & its Definition. Here we discuss the examples of voodoo economics and how does it work. You can learn more about from the following articles –