What are Anchoring and Adjustment?

Anchoring and adjustment refers to the cognitive bias wherein a person is heavily dependent on the piece of information received initially (referred to as the “anchor”) while making all the subsequent decisions. In other words, all the subsequent decisions are influenced and require adjustments to remain close to the initial anchor value, which can be a cause of a problem if the anchor is too different from the true value. This type of bias typically is seen when an individual builds future outcomes based on past available information. 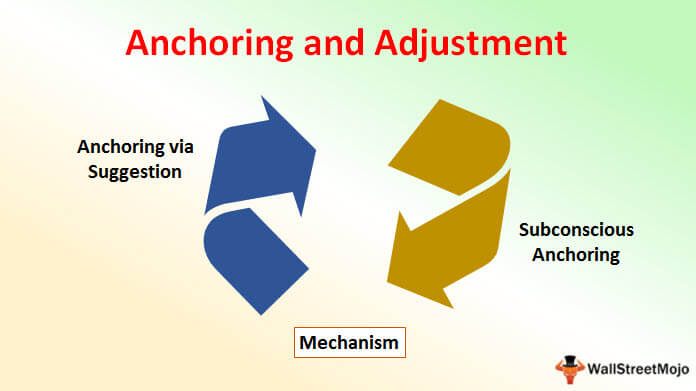 During the decision-making process, a person is said to be exhibiting anchoring and adjusting behavior when all their decisions are heavily influenced by the initial set of information. Typically, the individual would tend to integrate all those ideas that fall within the acceptable range of the anchor and reject those that are not in line with the anchor. So, in all forthcoming arguments, negotiations, estimates, etc. only those values are discussed that are close to the anchor.

Basically, the underlying principle of anchoring and adjustment is that an individual tends to choose a particular value or number as the starting point (a.k.a. the anchor) which eventually becomes the target number and subsequently the individual ends up adjusting the following pieces of information until it reaches within an acceptable range of the target value over the period of time.

As already discussed above, anchoring is a type of cognitive bias wherein an individual relies too much on facts that are provided prior to the decision making process with the objective to help the process. There are instances that the facts that are provided are entirely useless or even absurd. Nevertheless, research stats indicate that these initial set of information significantly impact the decision making process irrespective of their relevance to the subject matter. While anchoring is believed to be a semiconscious or subconscious phenomenon, adjustment about the anchor is a totally conscious decision.

The underlying mechanism that drives the anchoring and adjusting effect can be linked to the following two concepts:

Anchoring and Adjustment Heuristic in Finance

In the field of finance, anchoring and adjustment are seen when an analyst builds an economic forecasting tool or a pricing model. The cognitive bias creeps in when an analyst tends to build the financial models based on a single big idea that fails to take into account many other related and relevant factors. The best modus operandi to mitigate the risk of anchoring is to assimilate the approaches of multiple models.

According to Phillip Tetlock, a social psychology researcher, the forecasters who make their predictions on the basis of multiple ideas or perspectives are able to build better forecasting models compared to those who emphasize on a single model. In short, an analyst can make his work less vulnerable to anchoring effects by incorporating the best of different models and forecasts into their model.

This has been a guide to What is Anchoring and Adjustment & its Definition. Here we discuss the anchoring and adjustment heuristic in finance and mechanism along with examples and disadvantages. You can learn more about from the following articles –