Cognitive Dissonance is nothing but mental stress when a person holds two or more conflicting beliefs at the same time. In simple terms, newly acquired information conflicts with preexisting understanding, in that case, people experiences a mental discomfort which is noticed as a Cognitive Dissonance. In financial terms, cognitive dissonance is measured by behavioral finance. 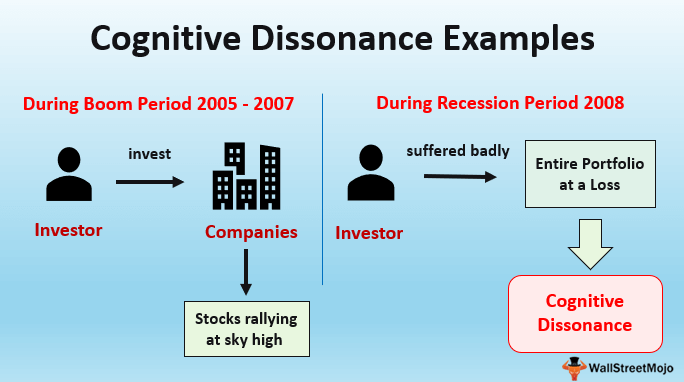 Consider a John is looking to buy a stock of an XYZ limited because he believes that XYZ limited will perform well in the future. XYZ limited stock is currently trading in the market at $70, and John is thinking of buying a stock if it falls a few dollars to $65. In three days stock price hit to $68, and John thinks the stock price will come to $65 sooner. However, after three days, suddenly Stock Price increased, and it reached to $75 because of buying demand from other investors. At this point, John will probably experience cognitive dissonance.

Now the question arises why John will experience cognitive dissonance, so will try to find out the answer to this.

Here John will feel discomfort because the sudden increase in the stock price of XYZ limited shows that stock was good to buy at the price of $68, and this was suggested by the market as compared to the previous trading price. There are high chances that John will buy some of the stock at the price of $75 to relive the discomfort he feels. John may think that buying a stock at a higher price is still good because other investors are also buying at the same price, but by telling this rationalizes buying John is being irrational.

The above example tells him that investors should stick with their decision, and trade should not be determined with emotion.

One of the investors thinks that the current market is at a too high position, and it may fall in the near future. Since the market is at too high position, the investor is worried about it, and he is planning to sell out some of the equity holdings. The investment manager of investors asked investors that why he thinks that the market will fall in the near future, and he says that the global economy is slowing down as published in several newspapers, and corrections will happen in the market because of this. Then investment manager advice investor that does not influence through numerous news articles.

Even after Investment Manager advised, investors sold out his 50% equity, and the next day market tumble by 5%. As the market drop by 5%, the investor feels good, and he thought that he made the right decision. Still, after a week, news comes out that the global economy is improving, and the market started showing rally. Now investment managers suggest investors to add back sold equity into the portfolio to get investor long-term investment plans on track.

So the above example shows that investors influence thorough news articles, and he took sold out decisions without checking facts and figures and made a mistake. It shows that cognitive dissonance can cause the investor to fail to recognize the information, which helps him to make a good investment decision.

Keith bought a stock of Opto circuits at a trading price of $125. The next week, the stock price of a company fell, and upon analysis, Keith came to know that their aggressive inorganic growth has filled their balance sheet with debt. By this time, the stock was trading at $75, and Keith bought some more stock again. Keith’s understanding was that the company made good quality products, and he read the report that once the economic condition improves and interest rates come down, company stock will perform well. Due to this, Keith was buying at every fall in stock price. During this period, Keith was looking for some good news about the company, and he used good news about the company to support buying into the stock at every fall.

Keith still in the hope that the company’s position will improve, and he will get the stock price of $125 at least.

So the above example explains to us that investor who bought the stock in spite it was falling heavily and sitting in huge losses. An investor looks for positive news and information about the company just to support his buying decision and to hold on investment to sell it at a profit in the future.

During the stock market rally or boom during the year 2005-07, one of the investors in India was investing in companies of capital goods, infra, and the power sector. Fortunately, that time, those stocks were rallying sky high. The investor was really confident that he had enough skills and expertise in picking stocks because whatever he picked went up almost daily. He was also entered into a few hot IPO’s.

Then when the global economy was facing recession during the year 2008, the investor portfolio suffered badly, and he sold off his entire portfolio at a loss.

The above example shows that in investing, overconfidence investors and traders believe that they are better than everyone else in choosing the best stocks and funds and even better time to enter and exit the position. They are under the belief that they were better and wiser than others in choosing an investment.

This article has been a guide to Cognitive Dissonance and its definition. Here we discuss the top 4 examples of cognitive dissonance in Investing along with detailed explanations. You can learn more about accounting from the following articles –