Examples of Confirmation Bias in Business 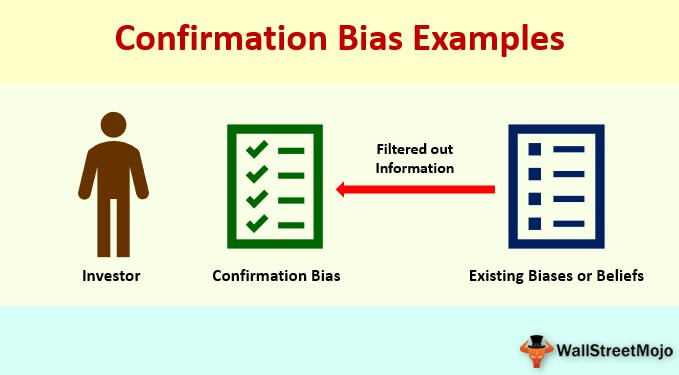 Vivek is a long-time investor in the stock market. He does invest by researching and screening the stock by himself. One of the stocks that he has recently shortlisted is Reliance Power, and he has learned about the bankruptcy of the firm and is considering selling the stock.

A few days later, a piece of news is published that Reliance power is getting help from a brother of the chairman of Reliance power and is the firm is expected to revive back. Still, however, Vivek prefers to avoid the information and looks for information that signs towards bankruptcy.

What kind of bias is Vivek suffering from?

Even though Vivek has been a long time investor in the market but when it comes to its view, he prefers to stick on that and looks for the information which will confirm his view. As given in the example, he first created a view of selling the stock of Reliance Power based upon his initial view of bankruptcy. Later, when some positive news is published through which the firm can revive itself, he ignores that view and looks for other information which would confirm its existing view of selling the stock. Hence, this is a case of confirmation bias where investor forms initial view and filters out information which supports their belief.

John is the lead analyst of a multinational investment bank. He is researching the macro markets. He recently attended a seminar on market views for next year, where he heard a renowned economist who publishes books on the macro market and who stated few facts like there slow growth in the market which was witnessed in 2008, sales were falling, liquidity crunching cost-cutting by big firms. Hence from that, he created a view that next year could be a year of recession again. He publishes reports and releases to his client starting to be cautious as a recession could be ahead soon and invest accordingly in debt securities and avoid equities for the time being.

After a few months, the world bank comes with the data stating that a new trade treaty was signed between the US and China to cut import taxes and welcome globalization further.

One of the clients of John, emails him asking whether he has revised his view?

John replies to his email stating that a deal signed doesn’t change the numbers, and there has been no progress in the market, and in fact, it was drowning more as per his more recent research.

Discuss the type of bias John is suffering from.

John first created an initial view of the recession based on the information he learned in a seminar. i.e., sales were falling, liquidity crunching, cost-cutting by big firms, etc. However, later when there was a big deal signed between the US and China still, and when his client queried him about his initial view, he decides to avoid that information and again looks for the information which confirms his view and bias of recession. This is a clear sign that John is suffering from cognitive bias and is suffering from confirmation bias as he is looking for only that information that supports his view and filtered out the information of the US and China deal.

Josh William is a new doctor in the colony. He was recently visited by the famous actor Mr. Khan who came to him for a diagnosis. He had symptoms like headache, excessive sweat, chills, but when he measured his temperature, he noticed that it was less than 100.40 F (38 C) and despite that, he concluded that he is suffering from high fever since 3 out of 4 symptoms confirmed that he has a high fever. After prescribing medicines when the next day, he checked the body temperature, which was still below 100.40 F, and body skin was also not hot. Still, the doctor didn’t change his medicine.

Is the doctor suffering from any bias, and if so, kindly elaborate?

The patient was suffering from headache, excessive sweat, chills, which are also a common feature of fever. Still, the doctor avoided major information that disconfirms his belief about fever, which is the patient’s temperature was lower than 100.40 F (38 C). He avoided that information, and again the next very day, he also observed that body skin was not hot, and the temperature was low than 38 C; still, he didn’t change the medication.

Aditya, who has become newly investment advisor and is approached by his client Vijay to put his views on Walmart. Before Aditya can put his views, Vijay informs him about the way stock has been performing like very good YoY growth in EBITDA, EBIT, and Net profit, also growth in revenues, and the way the market has been perceiving the stock which has already put the stock in premium, and Vijay is interested in buying for the long term and wants to create the concentrated position. However, after hearing Aditya states that Walmart has started more aggressive marketing and offering discounts now 7% from earlier 5%, which could impact their margins. Vijay avoids that information and asks him to include the stock in the portfolio.

Again, here it appears that Vijay is suffering from confirmation bias as he ignores the critical information that could hamper the Walmart’s margin and later would impact the stock price.

It is one of the most common biases seen in the real world and day to day life where people seek only those evidence that supports their initial view and filters any information that would disconfirm their belief. To avoid such a situation, one should look for contrary advice, avoid confirming questions, seek more information, and study the impact of the same and then act accordingly.

This article has been a guide to Confirmation Bias in Business and its definition. Here we discuss the top 4 real-life examples of confirmation bias with a detailed explanation. You can learn more about financing from the following articles –