Buyout is the process of acquiring a controlling interest in a company, either via out-and-out purchase or through the purchase of controlling equity interest. The underlying principle is that the acquirer believes that the target company’s assets are undervalued.

Usually, buyout takes place when a purchaser acquires more than 50% stake in the target company resulting in a change of management control. In case the stake is acquired by the company’s own management, then it is known as a management buyout (MBO). On the other hand, if the acquisition is funded through a significant level of debt, then it is known as a leveraged buyout (LBO). Usually, companies opting to be private go for buyouts.

In some cases, the management of the target company are not very willing to go ahead with the acquisition, and such buyouts are considered to be hostile takeovers, while, the rest is seen to be friendly takeovers. The funding used in transactions is usually provided by private wealthy individuals, private equity investors, companies, pension funds and other financial institutions.

There are two major types – Management and Leveraged buyout. 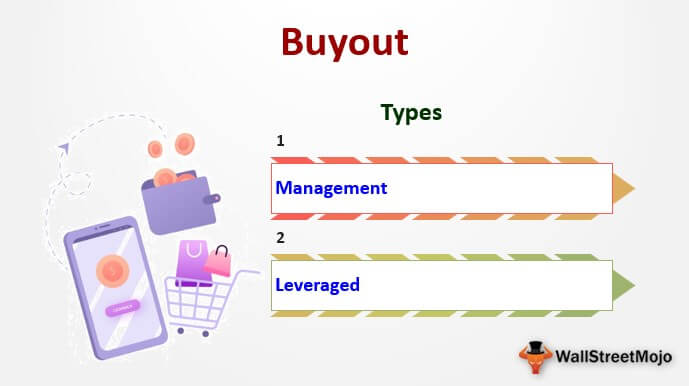 In the year 2013, Michael Dell got involved in one of the nastiest Tech buyouts. The founder of Dell joined hands with a private equity firm, Silver Lake Partners, and paid $25 billion to buy out the company that he had originally founded. In this way, Michael Dell took it private so that he had better control over the company operations. This is a classic example of a management buyout.

In the year 2007, Blackstone Group acquired Hilton Hotels in a $26 billion LBO deal. The deal meant that each shareholder got a 40% premium over the prevailing share price. The acquisition was largely backed by debt funding of $20.5 billion while the remaining was in the form of equity by Blackstone. Some of the banks in the consortium lending included Bank of America, Lehman Brothers, Goldman Sachs and Morgan Stanley.

This has been a guide to buyout and its meaning. Here we discuss process, examples and top 2 types along with advantages and disadvantages. You may learn more about financing from the following articles –